Gets or sets the variable distance value (as a fraction of axis units) between two bars of different 2D Bar Series shown at the same argument point.

The BarDistance property is introduced by the XYDiagram2D class, to synchronize it in all 2D Side-by-Side Bar series which are present in a chart. 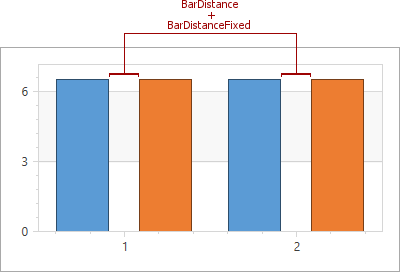 See Also
BarDistanceFixed
BarWidth
XYDiagram2D Class
XYDiagram2D Members
DevExpress.Xpf.Charts Namespace
Feedback
Was this page helpful?
Thanks for your feedback!
Any other suggestions? Tell us here.