Funnel charts are often used to indicate stages in a sales process, e.g., to show the amount of potential revenue for each stage. This type of chart can also be useful in identifying potential problem areas in current processes, such as with an organization’s sales.

Normally, a funnel chart displays values as progressively decreasing proportions, which are expressed in the funnel series points’ top widths. So, the data point which has the greatest value in the collection is considered to be 100%, and it is represented as the widest polygon, built on top of the funnel. The next series point value is represented by the subsequent polygon, whose top width represents its value’s ratio to the previous point’s value and so on, up to the last point, whose bottom width is equal to its top. 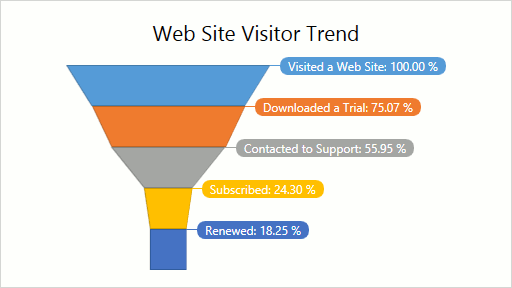 For information on which series view types can be combined with the Funnel Series view, refer to the Series Type Compatibility document.