The Chart Control uses axes to manage its coordinate space. Axes also contain elements that improve a chart’s readability. The axes’ appearance and functionality depends on the diagram type. For example, the Cartesian chart consists of two perpendicular axes for positioning pairs of arguments and values.

The AxisBase class is the base class for all chart axis types. The AxisBase‘s properties and methods define the functionality that is common to all axes.

The type of arguments’ and values’ axes that are allowed depend on the diagram type. For example, a 2D XY Diagram diagram requires an arguments AxisX2D axis and a values AxisY2D axis; a 2D Polar Diagram requires PolarAxisX2D and PolarAxisY2D.

An axis’s measurement unit depends on the axis’s scale type: Numeric, DateTime, and Qualitative. The Chart control automatically determines an axis’s scale type based on the series’s data. Scale types are available using the Series.ArgumentScaleType and Series.ValueScaleType properties. Refer to Axis Scale Types to learn more about scale types.

You can rotate a 2D XY diagram and show an x-axis vertically and a y-axis horizontally using the XYDiagram2D.Rotated property. Swapping axes does not affect the axis’s functionality (an x-axis still displays point arguments and a y-axis - point values).

It is possible to customize axis appearance, for example, modify an axis’s color or its position relative to a diagram. Refer to Axis Layout and Appearance to learn more. 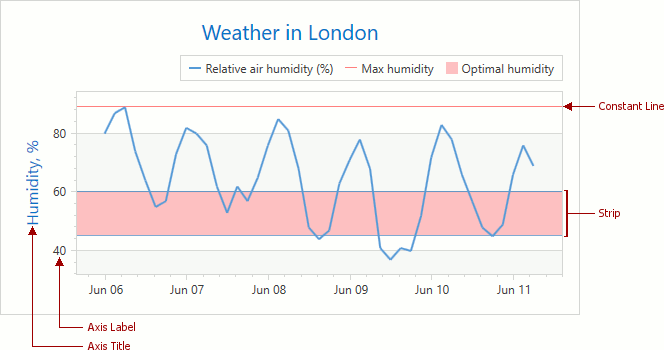 See Also
Axis Scale Types
Whole and Visual Ranges
Primary and Secondary Axes
Axis Layout and Appearance
How to: Show or Hide an Axis in a Multi-Pane Chart
Was this page helpful?
Thanks for your feedback!
Any other suggestions? .
Your feedback has been sent