This topic describes the visual AppointmentDependency element, and lists several properties that affect its visual appearance.

The Gantt View can show relationships between tasks (appointments). These relationships are called task (appointment) dependencies. They indicate dependency criteria based on which tasks begin and end in relation to each other. For example, the Finish-to-Start dependency means that the second task may not start before the first task is finished. 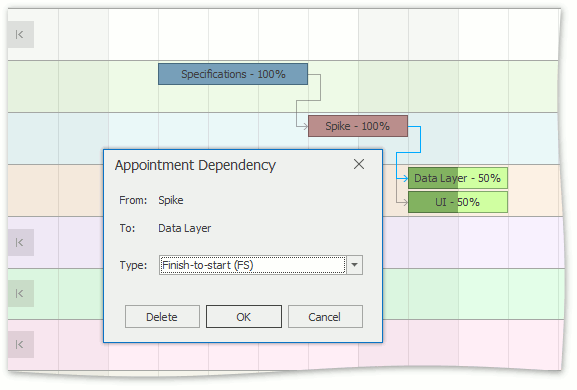 You can create a dependency using the appointment context menu. Right-click an appointment, select Create Dependency, and drag the line to the dependent appointment.

You can draw individual dependencies manually by handling the SchedulerControl.CustomDrawDependency event.

To support dependencies, the Scheduler should work in bound mode with the proper data mappings.

The currently selected dependencies are available via the SchedulerControl.SelectedDependencies property.

Use the SchedulerHitTest.AppointmentDependency value to check for the dependency element in the hit test (using the SchedulerViewInfoBase.CalcHitInfo method).

By default, dependencies do not impose restrictions on appointment start and finish values. You can enable constraints manually by handling the SchedulerControl.AllowAppointmentConflicts event.

See Also
How to: Create a Gantt Chart Application
Gantt View Specifics
Was this page helpful?
Thanks for your feedback!
Any other suggestions? .
Your feedback has been sent