The Gantt view displays appointments (also referred to as ‘tasks’ in the Gantt view) as horizontal bars along timescales, shows the current schedule status using “percentage-complete” shadings, and displays dependency relationships between appointments.

You can also use the GanttControl to display a Gantt chart in an application. See the following help topic for more information: Gantt Control.

The main difference between the Gantt view and other Scheduler views is the concept of appointment dependencies. The dependencies are visualized as illustrated in the Dependencies article. 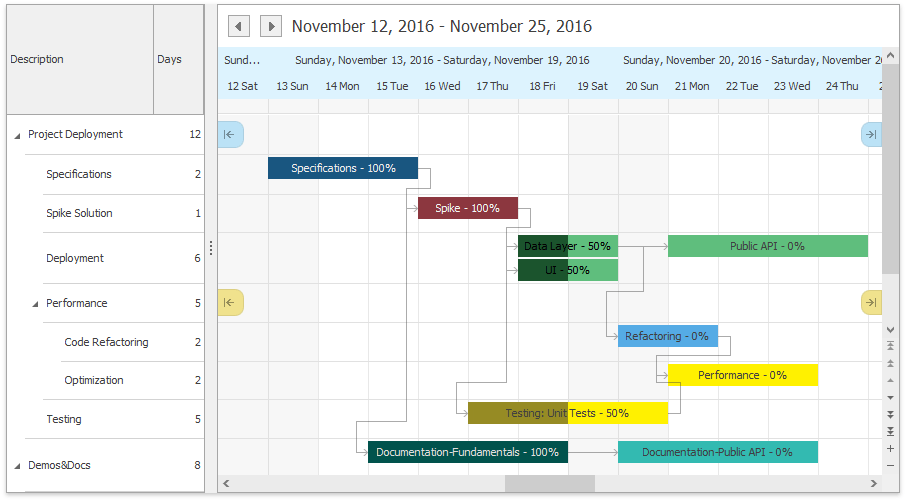 If you use the Gantt view, set the SchedulerViewBase.GroupType property to the SchedulerGroupType.Resource value and do not provide mapping for the Appointment.RecurrenceInfo property. It disables recurring appointments, and the SchedulerDataStorage.SupportsRecurrence property is false.

The Gantt view requires that the appointment Id field is generated by the data source (auto incremented field). For DevExpress installations of versions 17.2 and older, you should set the AppointmentStorage.CommitIdToDataSource property to false. The updated AppointmentDataStorage component released in version 18.1 does not require this step.

The Gantt view is a descendant of the Timeline View, so it inherits its properties, methods and events.

The following table lists the properties and methods that illustrate the functionality of the Gantt view.

The following table lists events that allow you to customize the view layout.

See Also
Dependencies
How to: Create a Gantt Chart Application
Feedback
Was this page helpful?
Thanks for your feedback!
Any other suggestions? Tell us here.