A series title provides additional information on a series. Only the Pie, Donut, Nested Donut and Funnel series can be displayed with a title. You can add an unlimited number of titles to these series. Note that a chart can have common titles. Refer to the Chart Titles topic to learn more. 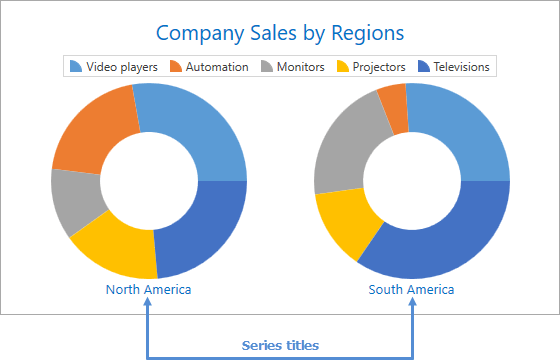 This document consists of the following sections:

How to Add a Title to a Series

The following markup shows how to add a title to the bottom of a Pie series:

The table lists classes and properties that are used in the example above:

How to Customize a Series Title's Appearance

Use the following properties to modify the series title's appearance:

See Also
Series Point Labels
Axis Titles
Chart Titles
Feedback
Was this page helpful?
Thanks for your feedback!
Any other suggestions? Tell us here.