The XY-Diagram represents one or several Panes. The pane is a rectangular area used to display axes (along with their grid lines, constant lines, regression lines, strips, etc.) and to plot the data points of one or more series. 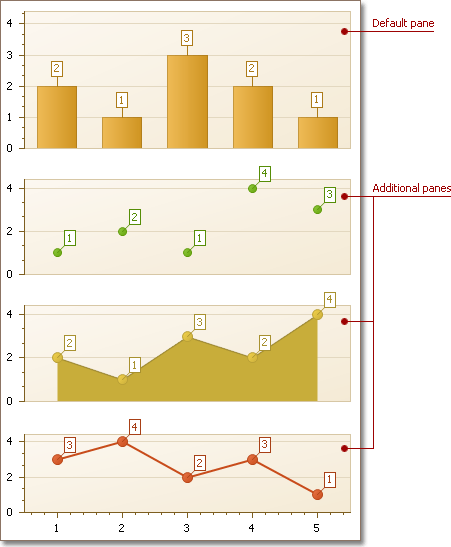 By default, a diagram displays a single default pane, which is accessible via the XYDiagram2D.DefaultPane property. If a diagram contains several series, it is possible to display each series on a separate pane. For this, add a new pane to the XYDiagram2D.Panes collection (by default it is empty) and set the Series.View.Pane property to this pane.

Also, if the same axis is used by several series, and these series are shown in different panes, you can customize the axis visibility using its Axis2D.VisibilityInPanes property.

The table below lists the main properties which affect the element’s appearance and functionality:

See Also
Panes
Feedback
Was this page helpful?
Thanks for your feedback!
Any other suggestions? Tell us here.