You can provide your applications with various context menus of different appearances and functionality. This document demonstrates how to implement and customize these menus.

There are three available types of context menus/popup controls.

You can display a menu in one of the following approaches: 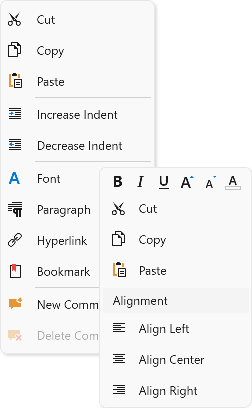 A popup menu is an instance of the PopupMenu class. This menu displays bar items and links, added to its PopupMenu.Items collection.

By default, all links within a popup are arranged in a single column. You can split them in multiple columns by doing one of the following:

To visually separate neighboring links, add BarItemSeparators between them. Another option is grouping your links into BarItemMenuHeader containers. These containers display their captions, so you can create named groups for your links. Moreover, you can apply different layout for each menu header by using the BarItemMenuHeader.MinColCount property.

Example: How to: Associate a Popup Menu with a Control 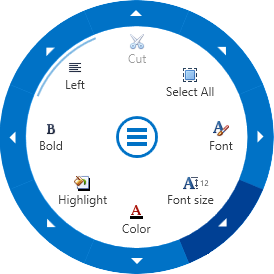 Radial menu is a popup menu inspired by Microsoft Note 2013. These menus are represented by objects of the RadialContextMenu class.

By default, first radial menu item is displayed within the first sector. Sectors are indexed clockwise starting from zero at midnight. Use the RadialContextMenu.FirstSectorIndex property to specify which sector should display the first menu item. You can also leave one or multiple sectors empty. To do so, set the RadialContextMenu.MinSectorCount property to a number greater than the amount of items, displayed by this menu.

In the middle of a radial menu sits the button that expands or collapses this menu. When a menu is collapsed, this button is the only visual element that remains visible to end-users. By default, when end-users invoke a radial menu, it expands automatically. You can toggle the RadialContextMenu.AutoExpand property value in order to change this behavior.

To create a multi-level radial menu, add BarSplitButtonItem objects to the menu's item collection. When end-users click these sub-menus at runtime, the radial menu replaces its initially visible items with child items, owned by the clicked button. At the same time, the central expand\collapse button becomes replaced by the back button. End-users can click this button to navigate back from sub-menus to their parent containers.

Example: How to: Create and Show a Radial Menu 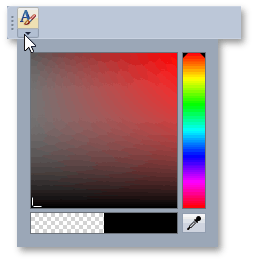 A container that can host other controls and supports the popup functionality. Represented by the PopupControlContainer class instance in code.

Example: How to: Create a BarSplitButtonItem