The NavBarControl and AccordionControl allow you to implement a navigation functionality in your application. The accordion control, which was released later than the nav bar control, provides a modern view and the following features.

To automatically convert an existing NavBarControl to an AccordionControl, invoke the corresponding command in the smart tag menu. The controls are converted automatically, and your assistance is not required. However, this topic describes how controls, groups, and items are interchanged, and which settings are affected.

Since a backward automatic conversion is not supported, make a back-up copy of the project before proceeding.

How the Controls are Converted

The NavBarControl can be displayed in different styles (see NavBarControl.PaintStyleKind). The AccordionControl does not support styles, but it can display the root groups and items in the control footer. This allows it to mimic the nav bar control’s view and behavior.

If the initial NavBarControl is painted in the NavigationPane style, the resulting AccordionControl displays its root groups and items in the control footer. 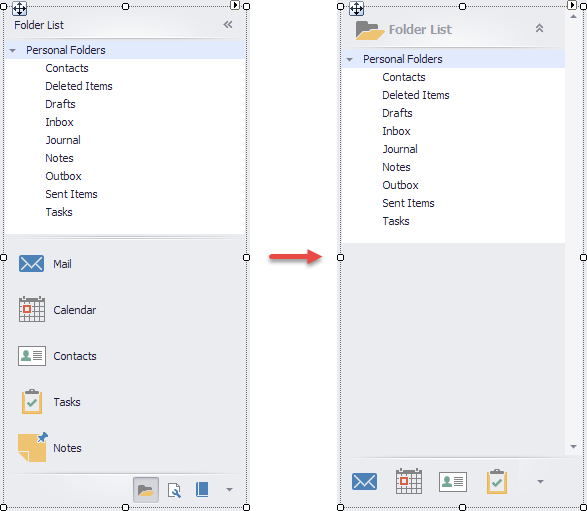 If the NavBarControl‘s paint style differs from the NavigationPane, the AccordionControl does not display the footer. 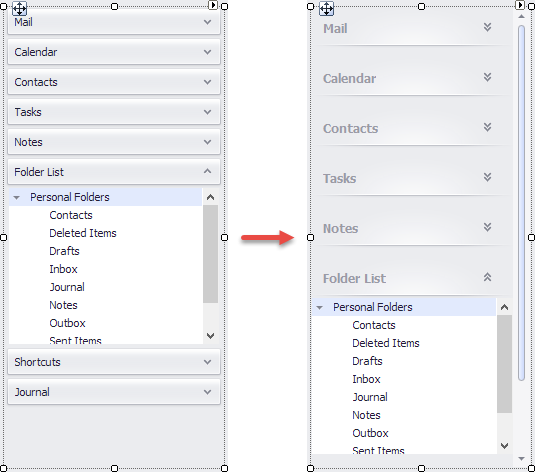 Converting the Application Form to a Fluent Design Form

You can enable the HamburgerMenu view for the created AccordionControl by using the AccordionControl.ViewType property. The hamburger menu can be embedded to a FluentDesignForm that features:

To convert the application form to the FluentDesignForm, use the Form Assistant component. For more information, see Fluent Design Form.