Like other DevExpress WinForms controls the Layout Control supports the Appearances mechanism which gives you the ability to modify the appearance settings (background and foreground colors, font settings, etc) of almost any visual element. Indeed the Layout Control contains properties to customize the appearance of layout items, layout groups, tabbed groups and controls displayed within the layout control (only if these represent specific DevExpress controls. See below). 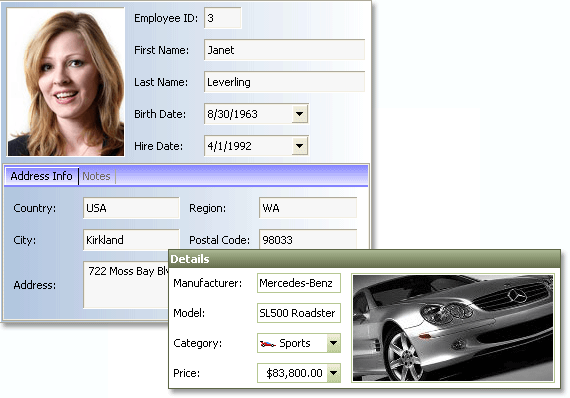 Appearance of Layout Items and Groups

To change the appearance settings of a specific layout item, group or tabbed group, use the properties that start with the Appearance prefix. For a layout item, use the BaseLayoutItem.AppearanceItemCaption property, which allows you to change the font settings and color of the layout item’s caption.

In specific painting schemes (Skin, WindowsXP and Office 2003), changing the background colors of the layout items, groups and group captions has no effect. In these modes, the colors are determined by the current painting scheme. To change the painting scheme, use the LayoutControl.LookAndFeel property.

Appearance of Controls within the Layout Control

Specific DevExpress .NET controls (e.g., the editors derived from the BaseControl class such as the TextEdit, ButtonEdit, LookUpEdit and ListBoxControl controls) allow their appearance and look-and-feel settings to be centrally customized via a style controller object. All of these editors implement the DevExpress.XtraEditors.ISupportStyleController interface.

One of the approaches to customize the appearance and look-and-feel settings of such editors in a centralized way is to add a StyleController component to a form, adjust its settings and assign the style controller to each of the target editors. These editors will then have the same appearance and look-and-feel settings that are specified by the style controller. Set the OptionsView.ShareLookAndFeelWithChildren option to false to support this scenario.

See Also
Appearances
Member Table: Appearances
Was this page helpful?
Thanks for your feedback!
Any other suggestions? .
Your feedback has been sent