To be displayed in a chart, a series should possess at least one data point, with at least one argument and its value(s) defined. The defined scale type should be appropriate for the argument and value data members. Four scale types are available: the numeric, date-time and time-span are applicable both to point values and for arguments, and for arguments only - the special qualitative scale type. Each scale type has its own requirements and promotes a specific functionality. To learn more, refer to Series Scale Types.

The sequence in which series points are drawn corresponds to the order they have in the collection. However, data bound series may expose a more sophisticated drawing sequence (especially when complicated data bindings are involved, or events like ChartControl.BoundDataChanged are handled, and when the qualitative scale type is used). In such situations, if it’s required that series points are drawn in a strictly determined sequence, this can be achieved by adding a static series with points arranged in the required way, and setting this series as the first item in the collection.

Series points can be created and populated either manually (being added to the collection returned by the Series.Points property), or automatically (based on a predefined template, under which they obtain data from a chart’s data source, and get their appearance). For details on using these approaches, refer to Providing Data.

Typically, a chart’s legend refers to the chart’s series. However, it’s possible to make the legend display a series points as well. As with series points labels, you can show a point’s arguments, values, or both. 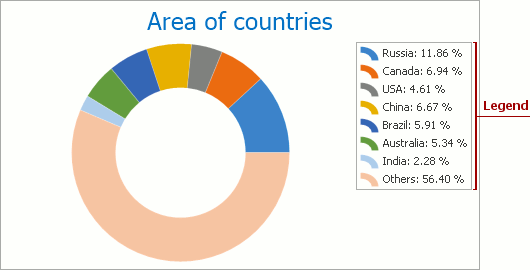