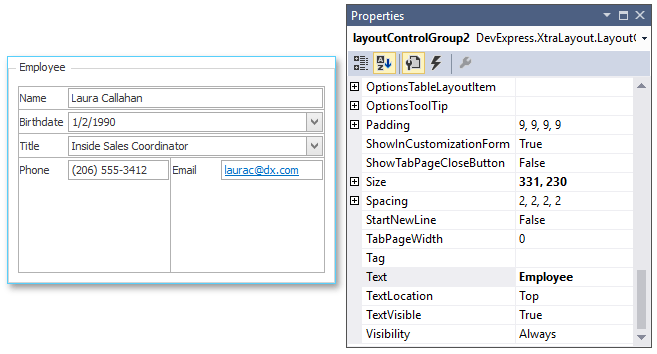 Each group displays a caption by default (except for the root group whose caption is initially hidden). The appearance and style of the group caption is dependent on the current paint scheme. A few examples are given below.

To specify a group caption, use the group’s BaseLayoutItem.Text inherited property. When a group is rendered as a tab page, this property specifies the text displayed within the tab.

The group caption can be aligned along the top, bottom, left or right edge. Use the LayoutControlGroup.TextLocation (BaseLayoutItem.TextLocation) property to specify the caption position.

The group caption visibility is affected by two properties: BaseLayoutItem.TextVisible and LayoutGroup.GroupBordersVisible. The caption is visible if both of these properties are set to true.

You can display a custom image within the group header, before or after the text.

To specify an image for the group, use one of the following methods.

Use the LayoutGroup.CaptionImageLocation property to specify the image’s position.

You can specify the group border and caption style by modifying the LayoutGroup.GroupStyle property. 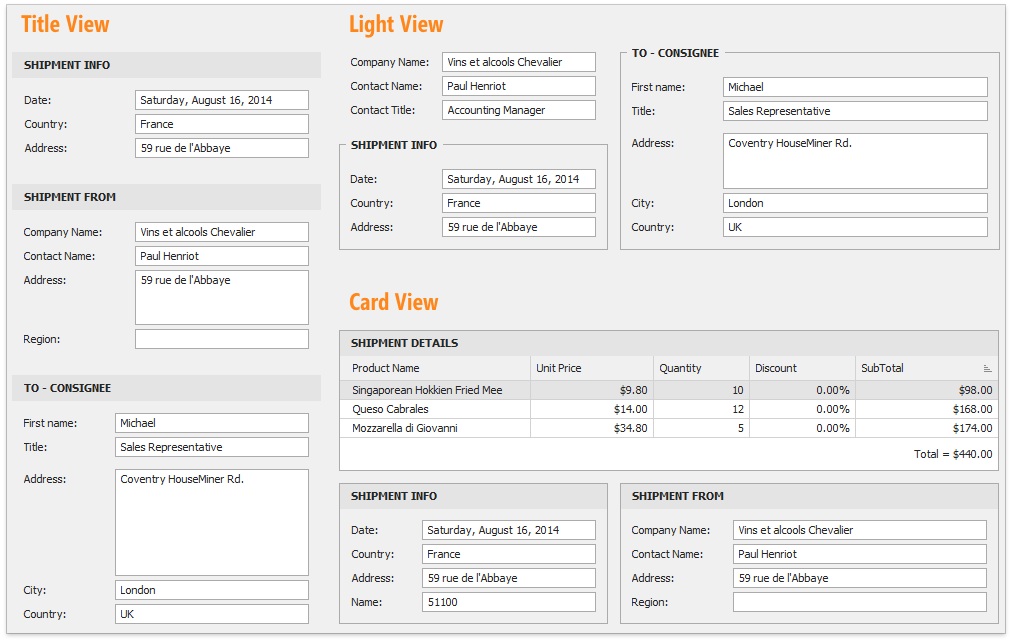 If this property has its default Inherited value, the group style depends on the currently applied skin.

Layout groups can be collapsed and expanded. Although it’s possible to collapse and expand layout groups freely in code using the LayoutGroup.Expanded property, end-users are not able to collapse/expand groups at runtime by default. To make this feature available to end-users, enable a group expand button with the LayoutGroup.ExpandButtonVisible property.

The expand button can be displayed at the beginning or at the end of the group header. Use the LayoutGroup.HeaderButtonsLocation property to specify the expand button’s position.

If a group is not displayed as a tab page, its borders are visible by default. You can, however, hide the borders by setting the LayoutGroup.GroupBordersVisible property to false. Note that hiding borders hides the group’s caption as well.

For each layout group, you can specify the inner and outer indents for the borders. It’s possible to specify different indents for the top, left, bottom and right edges or specify matching indents. The indents are determined by the BaseLayoutItem.Padding and BaseLayoutItem.Spacing properties. Please refer to the Spacing and Paddings topic for additional information.

The following table covers properties to customize the appearance of layout groups.

The Layout Control supports the appearance setting inheritance mechanism. For instance, the background color assigned to a group’s AppearanceGroup.BackColor property is automatically applied to the group’s children (including its nested groups). However, you are still able to change a nested group’s AppearanceGroup.BackColor property and so override the parent group’s setting.

The ability to customize a group’s layout at runtime is determined by the LayoutItemContainer.AllowCustomizeChildren property. If this property is set to false, it’s not possible to add items to, remove them from, or move them within the group.

To prevent a group from being hidden in the Customization Form, use the group’s BaseLayoutItem.AllowHide property.

See Also
Spacing and Paddings
Feedback
Was this page helpful?
Thanks for your feedback!
Any other suggestions? Tell us here.