This document introduces the Scheduler report controls, used to display various information in a Scheduler report. They are only available if you own both the XtraScheduler and XtraReports Suites (they use functionality from each product library). All these controls can be added to a report, at either Visual Studio design time or in the End-User Report Designer. You can programmatically add the controls to a report created at runtime, as well.

What is a Scheduler Report Control?

A Scheduler Report Control represents a specific report element which can be inserted into a report. It descends from the XtraReport class called XtraSchedulerReport. This class has the normal banded report designer, used in the XtraReports Suite.

Current implementation requires that report controls reside inside the DetailBand only, and not in the other report bands.

The appearance and behavior of a report control is defined by its type. See the section below to learn more about different report control types available in the current version of XtraScheduler Reporting.

All report controls are inherited from the base DevExpress.XtraScheduler.Reporting.ReportRelatedControlBase class. This class provides the basic functionality that is required by the objects that display and handle information in Scheduler reports.

Below is a list of basic report controls available in XtraSchedulerReports. 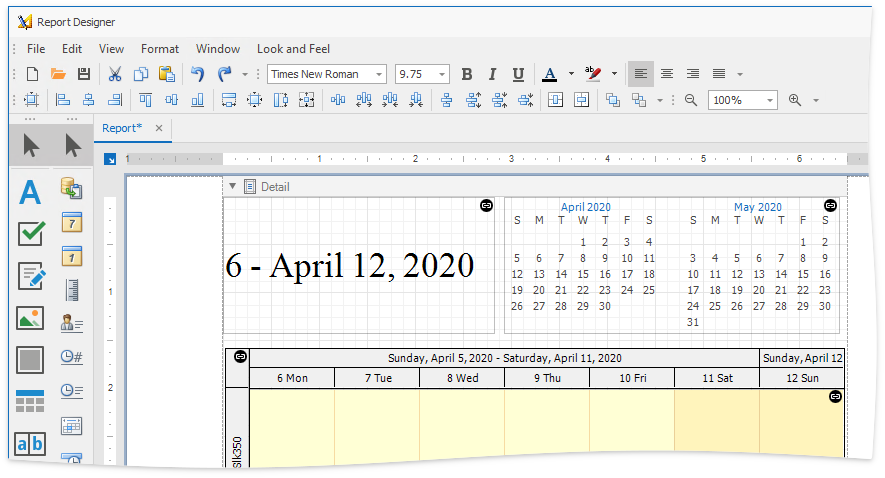 You can also add the Group Header report bands to display headers on every page or at the start of a group.

Use the context menu in the Report Designer to add group headers. 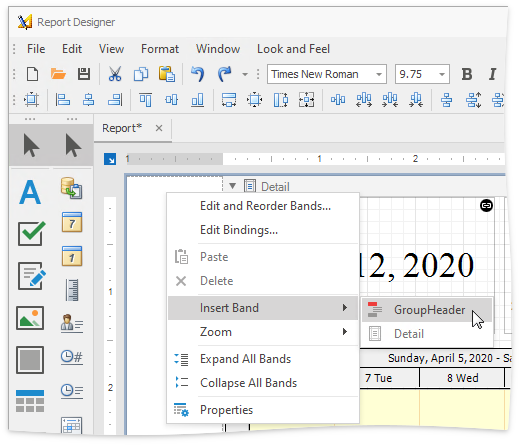 Then, place report elements inside the headers. Click the group header’s smart tag and select “Repeat Every Page“ to show group headers on every page.

Report controls can be added to a report at design time or in code. These methods are illustrated below: