Ornamental elements for digital gauges include background and effect layers, much similar to those seen in analog gauges (see the Ornamental Elements topic). These elements are used to decorate your digital gauges and apply certain style effects to them.

A Background Layer is a visual element that defines the background of the digital gauge.

When you add a new background layer to the digital gauge, it is painted behind all other gauge elements, because its BaseLeafPrimitive.ZOrder property is set to 1000, by default. If you want to bring this layer in front of other gauge elements (or paint it above other layers, if there are any), you need to set the ZOrder property to a lower value.

For example, the following picture illustrates a background layer that is overlapped by the symbols of the FourteenSegment view type.

A background layer is represented by the DigitalBackgroundLayer class.

An Effect Layer adds a style effect (for instance, a glare effect) to the digital gauge.

When a new effect layer is added to the gauge, it is painted foreground all other elements because its BaseLeafPrimitive.ZOrder property is set to -1000 by default.

To bring this layer behind other gauge elements, you need to set the ZOrder property to a higher value. 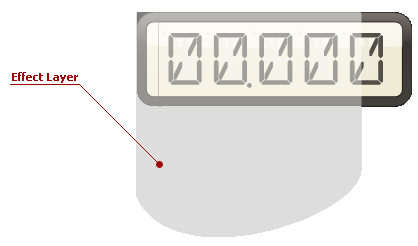 An effect layer is represented by the DigitalEffectLayer class.