The Nested Doughnut Chart is represented by the NestedDoughnutSeriesView object, which belongs to Pie and Donut Series Views. This view is similar to the Doughnut series view, but compares series with one doughnut nested in another one.

In the image below the Nested Doughnut chart shows the Age structure of the United States, Brazil and Russia population grouped by gender (Female and Male series). 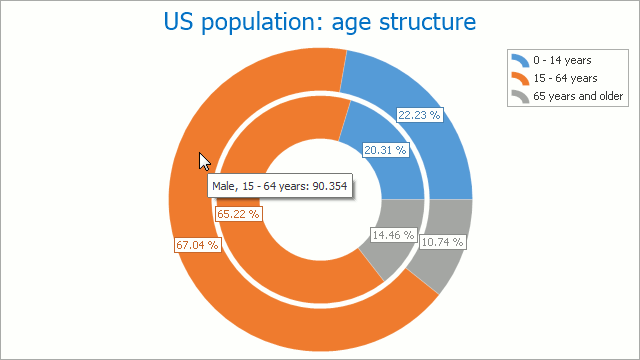 Note that to control the size of the nested doughnut’s hole, use the DoughnutSeriesView.HoleRadiusPercent property. For example, in the above image, this property is set to 40.

For information on which chart types can be combined with the Nested Doughnut Chart, refer to the Series Views Compatibility document.

The following example demonstrates how to create a ChartControl with a series of the NestedDoughnutSeriesView type, set its general properties, and add this chart to a form at runtime. Before proceeding with this example, create a Windows Forms Application in Visual Studio, and add all required assemblies in the References list of your project.