All appointments within the SchedulerControl can be either simple (non-recurring), occurring only once in the specified time interval, or recurring many times in the same interval. Whether an appointment is recurring or not is identified by the Appointment.IsRecurring value.

A series of recurring appointments can be either finite or infinite. Occurrence appointments are not stored in any collection, to avoid stack overflow for infinitive recurring series.

End-users can edit the recurrence pattern of any appointment at runtime via the Appointment Recurrence form. The image below demonstrates the common appearance of this dialog. 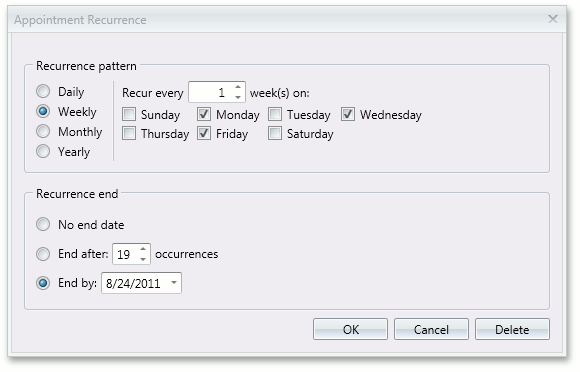 As stated above, from all the recurring series only the Pattern appointment is stored in the SchedulerStorage.AppointmentStorage collection. Others (Occurrence) are usually generated at runtime, to avoid excessive use of system memory.

See Also
What Is an Appointment
How to: Create Appointments with Various Recurrence Types Programmatically (legacy)
Feedback
Was this page helpful?
Thanks for your feedback!
Any other suggestions? Tell us here.