Bands are visual and logical groups into which you can arrange columns. You can hide, display and reorder bands along with their child columns. This document describes the band features, how to anchor bands and how to organize them into a hierarchical structure. This topic consists of the following sections.

A TreeList allows you to combine columns into bands. A band can own one or more columns, or one or more other bands (thus making it possible to build a hierarchy of bands).

Bands can be created using the Tree List Designer. After you created bands using the Designer, ensure that the TreeListOptionsView.ShowBandsMode property is set to Default or True. Otherwise, created bands will be hidden on the form at design time and runtime.

Bands combine columns. Thus, when you drag-and-drop a band by its header, its columns are moved as well. When you hide a band, its columns are hidden. By default, columns and bands can only be moved within their parent bands. To allow columns and bands to be moved between bands, enable the TreeListOptionsCustomization.AllowChangeColumnParent and TreeListOptionsCustomization.AllowChangeBandParent options, respectively. Dragging a band header edge allows changing the band’s width. The TreeListBand.OptionsBand and TreeList.OptionsCustomization properties provide access to the options that specify whether the described band’s features are available. See the Design-Time Band Customization topic to learn more.

To customize the appearance settings of all or individual band headers, use the TreeListAppearanceCollection.BandPanel and TreeListBand.AppearanceHeader properties, respectively. However, the background and border color settings are not in effect if the Tree List control is painted using the Skin, Office2003 or WindowsXP style (see the Look and Feel topic).

Each band has a caption displayed by the band header. This caption is specified by the TreeListBand.Caption property. If the TreeListOptionsView.AllowHtmlDrawHeaders option is enabled, you can use HTML tags to format the band caption (e.g., draw a caption or its part bold or italic, insert an image, etc.). For detailed information, see the HTML Text Formatting document. To assign images to bands, use TreeListBand.ImageOptions.

If the TreeListOptionsView.AllowBandColumnsMultiRow option is enabled, columns headers within bands can be arranged in multiple rows. In this case, column cells will be arranged one under another.

Tree List allows you to create hierarchical structures of bands. This means that bands located at higher levels contain bands located on lower levels. The number of band levels is unlimited.

The image below demonstrates a hierarchical structure of objects corresponding to the band structure shown above.

A Tree List allows you to anchor bands to a control’s left or right edge. As a result, such bands are not moved when scrolling horizontally the TreeList’s content. . This is useful if you need to always display a certain band’s content regardless of the scrollbar position.

Use the TreeListBand.Fixed property to anchor a band. By default, this property value is None, and the band is not fixed. Setting the property to Left or Right anchors the band to the left or right control edge, respectively. Fixed bands are visually separated from other bands by a fixed line.

The image below shows a Tree List with bands fixed to the left and right edges. 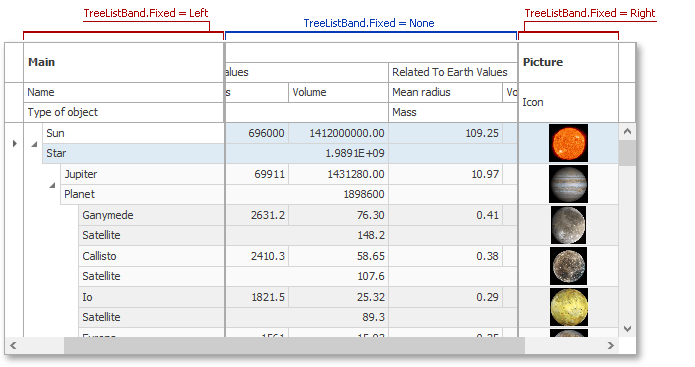 Note that anchoring bands is in effect only when the columns auto width feature (TreeListOptionsView.AutoWidth) is disabled.

The following image shows the Bands tab in the Customization Form with the Main, Picture and Absolute Values hidden bands. 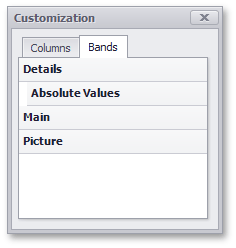 See Also
Customization Form
Design-Time Band Customization
How to: Create a Band Layout in Code
Feedback
Was this page helpful?
Thanks for your feedback!
Any other suggestions? Tell us here.