When appointments data is grouped (either by resources or by dates), the number of resources shown on the screen within the Scheduler Control at one time can make it difficult to see all the scheduled data. To make the Scheduler’s layout more readable, it is possible to limit the number of visible resources, and then scroll between them. There is a ResourceNavigator control embedded into the SchedulerControl, and shown if required, which allows end-users to scroll between resources.

The visibility of the resource navigator element depends on several conditions.

First, ResourceNavigator can only be shown when there are visible resources to display.

Second, the appointments should be grouped (the SchedulerControl.GroupType property value is other than SchedulerGroupType.None).

Third, there is a ResourceNavigator.Visibility property. When it is set to ResourceNavigatorVisibility.Auto, the control is shown only when the SchedulerViewBase.ResourcesPerPage property for the current view is not 0 (zero value means an indefinite number of resources per page).

The Resource Navigator control is composed of a scroll bar and a set of buttons. It may be shown horizontally (on the bottom line of a scheduler control, with buttons in the right corner) or vertically (on the right side, buttons at the bottom). The position of the control is chosen automatically. It is vertical in a DayView mode or in a WeekView, if appointments are grouped by dates, and horizontal in other view modes.

The mode of operation is rather straightforward - the user can click the buttons to move back and forth through the list of resources; one by one, or straight to the last one on the list. The scroll bar scrolls through resources. The scheduler tracks selections and displays the corresponding resource groups. The buttons with plus and minus signs increase or decrease the number of shown resources by one. 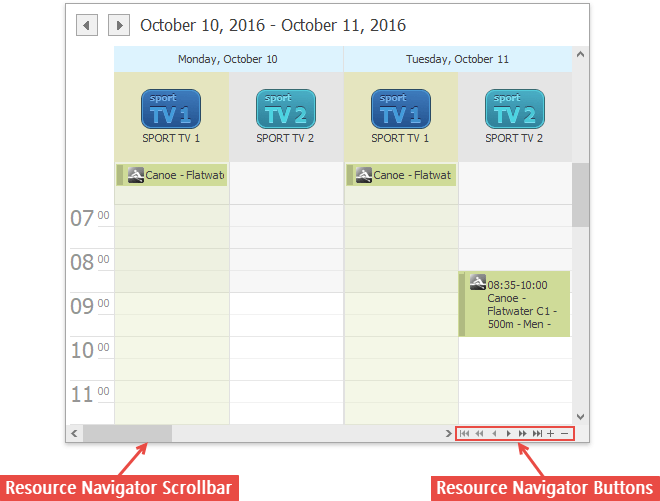 The number of resources displayed simultaneously is specified by the SchedulerViewBase.ResourcesPerPage property for each view individually.

See Also
Resource Navigation Services
Was this page helpful?
Thanks for your feedback!
Any other suggestions? .
Your feedback has been sent