The actions available to end-users can be restricted by specifying the SchedulerOptionsCustomization properties. For an example, see the How to: Prevent End-Users from Editing Appointments document.

The SchedulerControl allows end-users to modify existing appointments in the following ways:

A single mouse click within an appointment, or pressing F2, invokes the in-place editor, which can be used to edit the selected appointment's Subject. 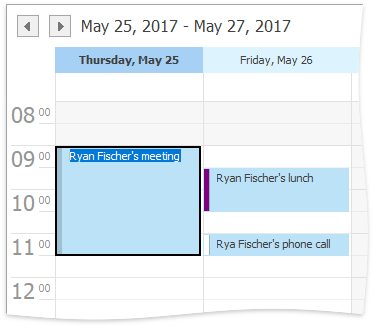 To learn how to create a custom in-place editor, refer to How To: Implement a Custom Inplace Editor for Appointments.

If a scheduling application is provided with the Bar or Ribbon UI, end-users can modify appointment properties (status, label, recurrence and reminder) using the Options toolbar or Ribbon page group, which is active when an appointment is selected by an end-user.