The actions available to end-users can be restricted by specifying the SchedulerOptionsCustomization properties. For an example, see the How to: Prevent End-Users from Editing Appointments document.

An appointment can be created via the SchedulerControl's context menu. The corresponding items which may be used to create a new appointment are available in the context menu, invoked when an end-user right-clicks any scheduler area which is not occupied with an appointment. 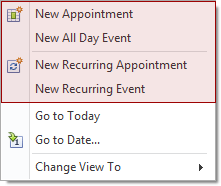