This document describes how a simple scheduling application operates. This topic introduces the basics for providing appointments and resources data for the Scheduler.

How Does the Scheduling Application Operate?

Client-server interaction is performed via the callback mechanism (default), although the common postback and update panel operation modes are also available.

The navigation between the scheduled appointments can be accomplished via the stand-alone controls of the Suite, or the controls hosted within the main Scheduler control. The Go To Date dialog window serves the same purpose.

The Scheduler Storage object is intended to work on the data layer to provide appointments and resources data to the scheduling application. In fact, the Scheduler Storage contains two separate data stores - one for appointments (Appointments) and one for resources (Assigning Appointments to Resources). When providing data to these stores, it’s necessary to specify mappings between data fields in the datasource, and their interpretation in the storage. Also, these stores provide the ability to optimize data loading, specify options specific to different data, add custom fields, etc.

The following schema illustrates the Appointment Storage and its main properties: 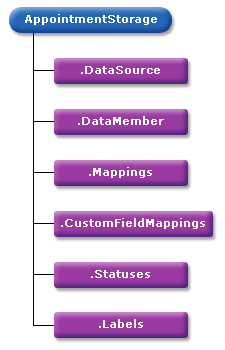 The following schema illustrates the Resource Storage and its main properties: 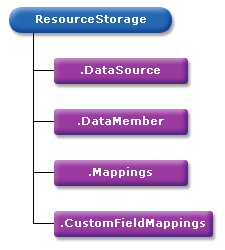