I have heard that TestCafe Studio does not use Selenium. How does it operate?

Unlike most testing solutions, TestCafe Studio is not built on Selenium. This allows us to implement features you cannot find in Selenium-based tools (for example, testing remote devices without extra plugins and automatic waiting).

TestCafe Studio uses a URL rewrite proxy that allows the application to work without WebDriver. The proxy injects client-side automation scripts into the page.

What is the difference between TestCafe Studio and open-source TestCafe?

* You can use the open-source TestCafe test runner to integrate tests with CI systems.

What is the difference between TestCafe Studio and TestCafe v2015.1?

You can find this information in our blog.

Which browsers does TestCafe Studio support? Which specific versions are supported?

You can find a list of supported browsers in our documentation. TestCafe Studio is tested against the two latest versions of each browser (except browsers whose versions are specified explicitly in this list).

However, TestCafe Studio should work properly with browsers that support HTML5 and released in the last three years.

What is the current version of TestCafe Studio? How do I update it?

To view the current version number:

This invokes the dialog that displays version information. 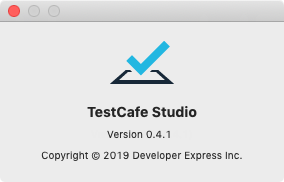 For Windows and MacOS: When a newer version of TestCafe Studio is available, the notification appears on the main toolbar. Click the Install link to update to this version.

I found a bug. How do I report it?

You can report a bug in our Support Center.

You can also create a codeless test, then convert it to JavaScript.

For more information about the difference between codeless tests and test scripts, see the previous question.

How to make sure that my test is being recorded correctly?

When you interact with a webpage during recording, TestCafe Studio automatically updates the test with corresponding actions. You can look at the editor to confirm that they are correct. For example:

After the test is recorded, run it to ensure it passes.

Can I use third-party modules in tests?

You can use third-party modules in both codeless tests and test scripts. Use the import statement.

Use fixture.clientScripts or test.clientScripts in test scripts to inject a module into the tested page. You can use this module inside client functions and selectors.

You can use third-party modules in codeless tests: include necessary require declarations in a Run TestCafe Script action.

How to clear browser cookies and local storages between test runs?

There is no need to do this. TestCafe Studio clears browsing data before starting a test: cookies, local storages, and user profiles.

How do I create user roles?

Codeless tests do not support user roles. However, you can convert your test to a test script and follow this guide.

How do I intercept HTTP requests?

Codeless tests cannot intercept HTTP request. However, you can convert your test to a test script and follow this guide.

I installed TestCafe Studio, but it doesn't start.

On Linux, run TestCafe Studio from the command line. Open the directory where you copied the executable and run the following command:

You should use the command line because certain Linux file managers, including GNOME’s Nautilus, do not launch raw binaries.

Some Linux versions, including CentOS and Arch Linux, may also throw the following error:

The SUID sandbox helper binary was found, but is not configured correctly. Rather than run without sandboxing I’m aborting now. You need to make sure that <testcafe-studio-dir>/chrome-sandbox is owned by root and has mode 4755.

To resolve this issue, go to the directory that contains TestCafe Studio executables (in the Terminal) and change the chrome-sandbox binary’s ownership and access permissions:

Use debug mode. Start TestCafe Studio from the command line with the debug flag:

Check if the console contains error messages. If so, take a screenshot and submit it to the Support Center.

Check PATH. On Windows, check if the %PATH% environment variable contains paths to system32 and powershell.

To work around issues that occur during online registration, register TestCafe Studio offline, and file a ticket that describes the issue in the Support Center.

The browser does not launch or TestCafe Studio cannot connect to the browser.

Check your proxy server. Another reason for this problem can be the proxy server you use to access the Internet. If your network is connected to the Web through a proxy, specify the proxy URL in the Preferences/Settings Dialog.

The browser opens an empty page whose URL ends with 'about:error' when I start recording.

Open the URL. Click Open Tested Page in the Test Editor toolbar or the page URL in the Fixture Editor. The website may be unavailable or the URL may be incorrect.

Use the recording browser. Try opening the tested page in the browser you use for recording if this browser is not your default.

Check the network configuration. Ensure that the hostname, port and proxy server settings are correct as described in the previous question.

I cannot record or run tests on macOS.

If these permissions are already enabled, uncheck the check boxes, then check them again, and restart TestCafe Studio. If this does not fix the issue, execute the following command to reset permissions:

When I start recording, test steps are not replayed as they are during test run.

After you start recording new steps in a test, TestCafe Studio replays the existing test actions. The playback is performed according to Record Configuration settings. Check these settings and adjust them so they match the Run Configuration.

TestCafe Studio does not fail when JavaScript errors occur on the page during recording. During test runs, this is controlled by the Fail if a JavaScript error occurs setting in the Run Configuration.

When I run a test, I get an unexpected error.

The most common reason for this is a JavaScript error on the tested page. Load this page in the browser, open the console and see if the page has any errors. In case there are errors, you can either fix them or disable the Fail if a JavaScript error occurs setting in the Run Configuration to skip them.

A test fails because TestCafe Studio could not find the required page element.

This happens when a test action Selector does not match any DOM element, the element is not visible, or another element overlaps the target element.

To determine the cause of this issue, do the following:

You can also update TestCafe Studio to the latest version to see if the problem persists.

TestCafe reports that a request has failed.

When TestCafe does not receive a successful response from a server, it outputs the following error:

You can use quarantine mode to complete tests if this problem occurs infrequently.

However, we recommend that you determine the cause of this issue and address it.

This error can occur in the following situations:

The Web server is not responding

Check if the Web and DNS servers are online and configured to accept requests to this URL.

When I edit a test while recording in Safari, TestCafe Studio lags and the browser reflects changes with a delay.

To fix this issue, keep the browser window at least partially visible during recording. If this is not possible, follow these steps to disable throttling:

I am stuck debugging failed tests. Can I obtain more information that would help me identify issues?

If you are unable to diagnose the issue with these techniques, you can run tests in the open-source TestCafe to record a video of the test run or take full-page screenshots.

Install TestCafe from npm and run tests from the command line. Do the following in testcafe command arguments:

You can also specify screenshot path patterns to use values like date, time, or browser name in subdirectory names.