There are three ways to create test scripts in TestCafe Studio. You can record tests directly as script files, write scripts from scratch, or convert codeless tests into scripts.

TestCafe Studio can execute, but not record CoffeeScript scripts.

For every new test recording, TestCafe Studio creates a new script file with one fixture and a test declaration.

When the preparations are complete, TestCafe Studio opens the browser that you selected, and waits for user actions.

TestCafe Studio saves the test page URL as an argument of the fixture.page function.

Pay attention to the recording panel browser overlay. If the Action Recording Tab is active, TestCafe is recording your page actions.

Throughout the recording process, TestCafe Studio inserts action code into the open test file. The Recording Destination Marker indicates the point of insertion.

Drag the marker to move it up or down.

Actions that interact with the page, like clicks and text input directives, rely on Selector queries to find their target DOM elements. TestCafe Selector queries are similar to CSS Selectors.

TestCafe Studio automatically generates Selectors when it records test actions. However, TestCafe can not record assertions and actions like hover. Use the Selector Inspector tab to define Selectors for these actions.

To generate a Selector:

Perform one of the following actions to stop the recording:

Record a Script button next to the test that you want to amend.

When TestCafe Studio executes a test action, it highlights the corresponding action code.

Hooks are action sequences that run before or after tests and fixtures. They often set up the testing environment (for example, authenticate the user) or clean up after the test (remove a database object).

Visit the TestCafe framework documentation to learn more about hooks.

You can control the test recorder with the following shortcuts: 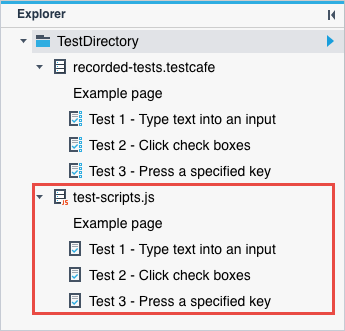 You can write test code in the built-in Code Editor. Follow the steps below to write a test script from scratch.

A test file should not contain more than one fixture.

Modify the fixture’s name and URL, and change the test’s name.

Before the introduction of the test script recorder, TestCafe Studio users could only record codeless tests. Test scripts are more flexible and powerful: they give you access to all the features of the TestCafe JavaScript API.

To convert a codeless to JavaScript, do one of the following:

This opens the Convert to JavaScript dialog. Specify the target file name and click Create.

Run all tests icon to execute a file in its entirety.