The report is a container for report bands with report controls placed inside them. The following picture illustrates the Scheduler Reporting Toolbox. 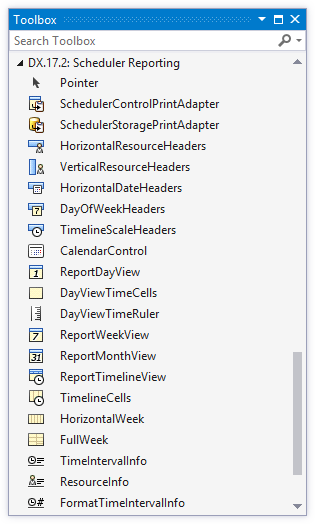 The basics of building the XtraScheduler Report is essentially the same as for XtraReports. We suggest that you review the XtraReports documentation, e.g. the Introduction to Banded Reports document, to become familiar with reports, if you haven’t already done so.

If you use NuGet packages, add the DevExpress.Win.SchedulerReporting package to use the reporting functionality in Scheduler.

See Also
How to: Print the ASPxScheduler Using a Report Preview (Step-by-Step Guide)
Was this page helpful?
Thanks for your feedback!
Any other suggestions? .
Your feedback has been sent