This document describes the concepts of using axis grid lines and tickmarks in the ASP.NET Chart Control. In addition, it highlights how a chart's diagram can be made interlaced. Before reading this text, it may be useful to review the basics of using axes and axis scale types in the WebChartControl.

Tickmarks divide an axis into equal sections by a step whose value is determined by the special options of an axis. Tickmarks are used to improve the readability of chart data. Tickmarks may be accompanied by axis labels.

Grid Lines are the reference lines used to improve the readability of a chart's visual data. They are drawn across an axis from its tickmarks through the entire chart.

There are two types of tickmarks and grid lines: major and minor. The following images demonstrate them. 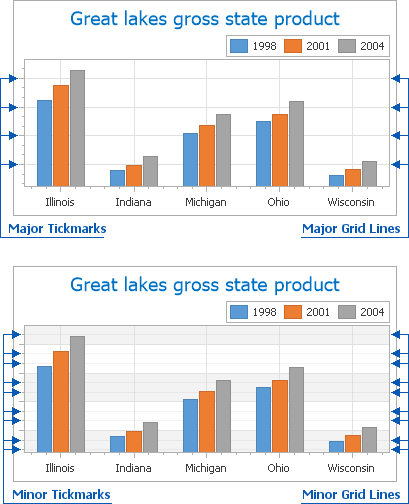 Note that interlacing does not depend on whether or not axis grid lines or tickmarks are visible. Moreover, interlacing and grid lines are maintained after the Axis2D.Visibility property is set to false. This situation is illustrated in the following image. 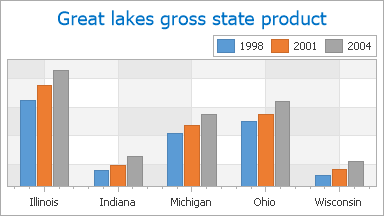 Interlacing depends on the spacing of grid lines. It is automatically determined by the ScaleGridOptionsBase.AutoGrid property (set to true by default) based on the major tickmarks of the axis.

You can access these properties at design time in the Properties window, after you select the required numeric or date-time scale.

The following images demonstrate the ScaleGridOptionsBase.GridSpacing property applied to the Y-axis.

To learn how tickmarks and grid lines (both major and minor) can be individually customized, refer to the following sections of this document: Customizing Tickmarks and Customizing Grid Lines.

To access the properties of axis tickmarks at design time, expand the Axis2D.Tickmarks property in the Properties window, as shown in the following image. 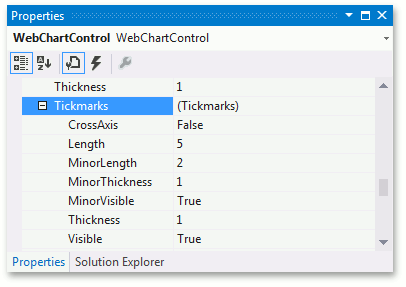 You can customize the appearance of both minor and major tickmarks from these properties, briefly described below.

The only property that affects both major and minor tickmarks is the TickmarksBase.CrossAxis property, which draws all tickmarks across the axis.

The following properties determine the appearance of major tickmarks only.

The following properties determine the appearance of minor tickmarks only.

The overall number of major tickmarks to be drawn along an axis is determined automatically (along with the number of major grid lines), since the ScaleGridOptionsBase.AutoGrid property is enabled by default. To learn more about this, refer to the Grid Lines and Tickmarks Overview section of this document.

To access the properties of grid lines at design time, expand the AxisBase.GridLines property in the Properties window, as shown in the following image. 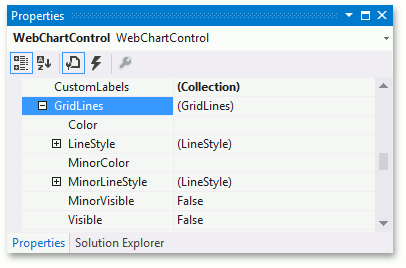 With the ASP.NET Chart Control, it is possible to define the appearance of major and minor grid lines independently, from the properties described below.

The following properties determine the appearance of major grid lines only.

The following properties determine the appearance of minor grid lines only.

As with tickmarks, the number of minor grid lines to be displayed between each pair of major gridlines is determined by the AxisBase.MinorCount property. Again, note that this property affects both minor tickmarks and grid lines.

The overall number of major grid lines to be drawn along an axis is determined automatically (along with the number of major tickmarks), since the ScaleGridOptionsBase.AutoGrid property is enabled by default. To learn more on this, refer to the Grid Lines and Tickmarks Overview section of this document.

See Also
Axis Appearance and Position
Axis Labels
How to: Customize Gridlines and Tickmarks of an Axis
Feedback
Was this page helpful?
Thanks for your feedback!
Any other suggestions? Tell us here.