To make sure that your application properly implements script security, both the execution of all report scripts and the capability to view and edit scripts in the Web Report Designer are disabled by default.

To learn how to enable scripting in the Web Report Designer, see Scripts Security.

The Script Editor allows end-users to write code for specific event handlers in the End-User Report Designer to adjust the behavior of report controls, bands, or a report itself. This topic describes the basic principles of using scripts in XtraReports, the Script Editor interface and shows how scripting can be used in a report.

The Script Editor provides end-users with the capability to write and execute scripts at runtime when a report is generated. Note that although it’s possible to add scripts in both the Visual Studio IDE and in the End-User Report Designer, this feature is primarily intended to be used by advanced end-users who want to slightly customize a report in the End-User Report Designer. 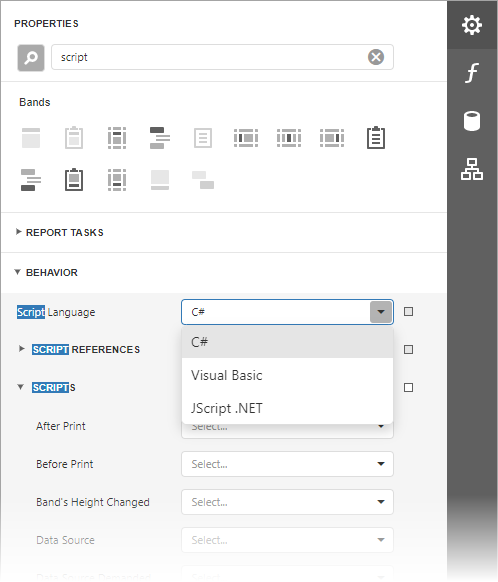 The Script Editor supports intelligent code completion that makes it easier and faster for end-users to write scripts. Context-aware hints are displayed on pressing CTRL+spacebar. This feature is only supported for the C# and Visual Basic .NET script languages.

Intelligent code completion is available only for .NET Framework and DevExpress libraries deployed with the application and cannot be provided for custom assemblies.

Each report element has its own set of events that can be handled by the Script Editor. To handle an event of a report element, do the following.

See Also
Scripts Security
Was this page helpful?
Thanks for your feedback!
Any other suggestions? .
Your feedback has been sent