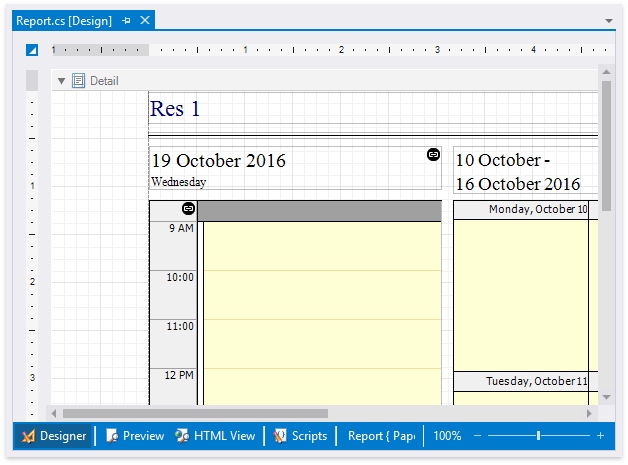 The basics of building the XtraScheduler Report is essentially the same as for XtraReports. We suggest that you review the XtraReports documentation, e.g., the Introduction to Banded Reports document, to become familiar with reports and the Visual Studio Report Designer, if you haven't already done so.

Instructions on creating a scheduler report are provided in the How to: Print a Scheduler Using a Report Preview (Step-by-Step Guide) document.

The report contains report view components. They are like the views which exist in the XtraScheduler, so there are ReportDayView, ReportWeekView, ReportMonthView and ReportTimelineView components.

XtraReports end-users can use scripting - they can write code for specific event handlers of report controls, bands, or a report itself in the End-User Report Designer. Scheduler Reporting controls also support scripting. For more information, review the Scripting article.

See Also
Printing
Scheduler Report Controls and Components
How to: Print a Scheduler Using a Report Preview (Step-by-Step Guide)
How to: Create a Report without Visible Scheduler Control
How to: Create an XtraSchedulerReport at Runtime
How to: Export a Scheduler in PDF format
Feedback
Was this page helpful?
Thanks for your feedback!
Any other suggestions? Tell us here.