TestCafe Studio v1.4.1 incorporates the recent major update to the TestCafe test runner — v1.11.0. Read the official release announcement for a detailed overview of the enhancements in this version: TestCafe v1.11.0 Released

We updated the underlying version of Electron to v10.2.0. This upgrade improves the stability and performance of TestCafe Studio.

Take a Screenshot of an Entire Page

TestCafe Studio's Take Screenshot action now includes a Capture Entire Page option. Enable this option to capture the whole page, including content that is not visible due to overflow.

Take a Screenshot of a Page Element

Because this feature is still in beta, TestCafe Studio suppresses new windows to avoid compatibility issues. When a page tries to open a new window, TestCafe Studio opens the URL in the same window instead. The browser navigates to the previous page when the test returns to the original page.

However, you can enable multi-window support during tests in the Run Configuration if your test scenario requires new windows. To do this, use the newly added Allow new windows option.

TestCafe Studio can now serve tested pages over HTTPS. This allows you to test website functionality that requires an SSL connection, like cryptographic or geolocation features.

Activate the Use SSL option in the Preferences/Settings Dialog to enable HTTPS. You can use your own certificate signed by a trusted CA, or a self-signed certificate shipped with TestCafe Studio. 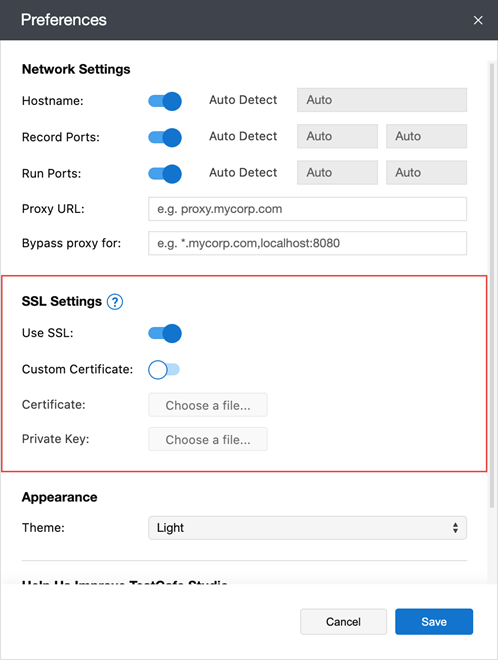 Run tests in Google Chrome, Chromium, and Chromium-based Edge in mobile device emulation mode. You can emulate a particular device or a responsive screen with the specified dimensions. Use the Emulated device setting in the Run Configurations Dialog in the Browser Options section.

Specify the browser's command line flags to pass options to the browser. To do this, use the CLI flags field in the Run Configurations Dialog's browser options.

You can skip uncaught errors in test scripts and make the test run stop after the first failed test.

TestCafe Studio currently generates several selectors for a page element. The generator uses a different approach for each selector and produces different types of selectors. This ensures an optimal selector can be found. Now you can also add your own attribute-based selector types and prioritize or disable the built-in types to customize generator's logic.

For instance, you can configure TestCafe Studio to use a custom attribute for the primary page element identification, or disable the 'id' attribute if the page uses unreliable dynamic IDs. 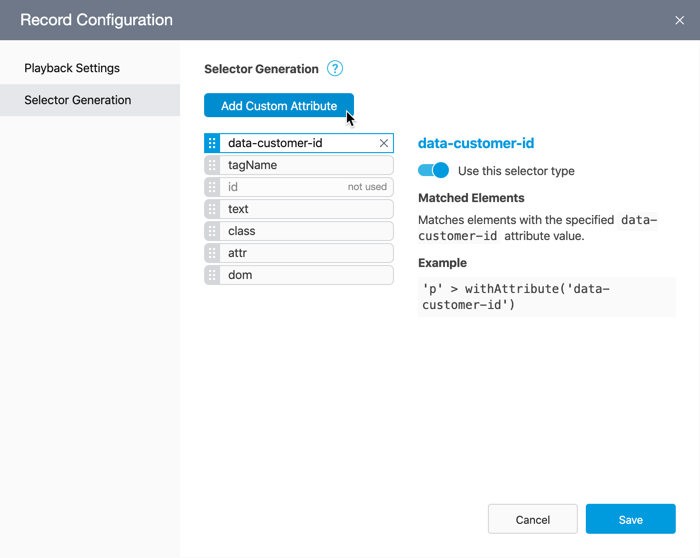 We redesigned and adjusted timings for the inline help tips, tooltips for the Action Panel, test, fixture, and report headers. They pop up faster and look consistent across platforms.

The Status Panel in the Visual Test Recorder now indicates if a recording, playback or custom script execution is in progress.

TestCafe Studio can now record and run tests in the new Chromium-based Microsoft Edge on Windows and macOS. Select Microsoft Edge from the record or run configuration drop-down list. Headless mode is also supported for the new Edge.

The TestCafe Studio application for macOS passed through Apple notarization. This fixes compatibility issues with macOS 10.14.5+. TestCafe Studio no longer displays a warning that Apple cannot check it for malicious software. To run TestCafe Studio, applications from identified developers must be allowed in Preferences -> Security & Privacy -> General.

The status panel displayed in the browser when tests are recorded and run has been redesigned to better fit into small browser windows and mobile devices.

The Remove actions button in the Test Editor toolbar now removes selected actions only. To remove all actions, use Cmd/Ctrl+A and click Remove actions.

In the Explorer panel, you can now press Cmd/Ctrl+V when a test or hook is selected to paste the copied test/hook in the same fixture. Alternatively, you can select Paste from a test's context menu.

We added an action that executes custom TestCafe scripts in the recorded tests. You can use TestCafe API, third-party, and core Node.js modules in these scripts.

You can use features from any Node.js package to facilitate test scenarios where you need to communicate with external resources, access and process online or local data, etc.

Custom scripts also enable you to use all TestCafe features without converting the recorded tests to JavaScript. You can intercept HTTP requests, run client-side code or work with page objects.

TestCafe Studio allows you to run custom scripts during recording to debug them. You can use the standard console output methods to print the debugging information.

You can now copy or cut actions in the Test Editor and paste them in the same or different tests or hooks.

You can now specify test actions that are executed before and after each test in a fixture. These action sequences are called test hooks (the before each and after each hook). 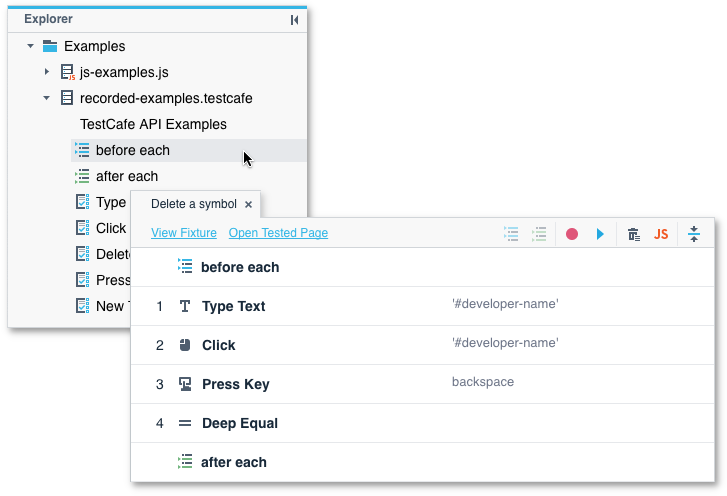 Hooks allow you to extract repetitive actions, like logging in or opening the tested view, and reuse them within the fixture.

You do not need to record hooks from scratch. If you have tests that begin or end with the same actions, you can move these actions to a hook in the Test Editor.

You can add or modify actions in hooks the way you edit tests. 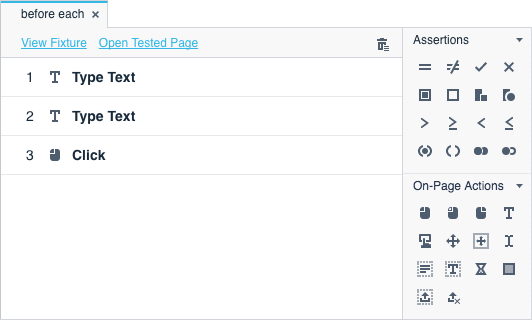 We replaced the test name, fixture name, and tested page URL with short links that open the Fixture Editor or the tested page. The toolbar is also more compact and organized.

Collapse All Actions in the Test Editor

Collapse All Actions button to the Test Editor toolbar. Use it to collapse action parameter areas and display compact test steps.

Install and register TestCafe Studio without an internet connection. You can use any other device to obtain the registration code from our website or email and enter it on the offline computer. 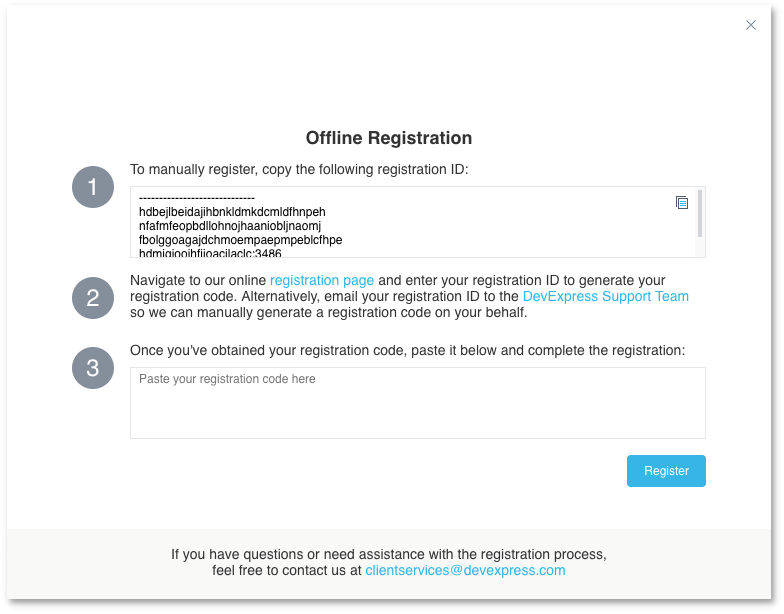 You can now specify the machine's domain and workstation ID for NTLM authentication. 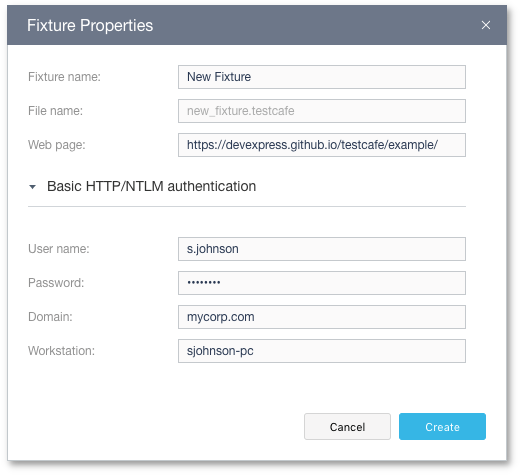 This is the first official TestCafe Studio release.

You can now purchase a subscription that includes the IDE and 12 months of free updates. For more information about the available options, see Pricing.

Chrome, Chromium and Firefox browsers support headless mode. In this mode, they do not display the UI, but rather render webpages in the memory and provide automated control over these pages.

TestCafe Studio now allows you to run tests in headless mode in these browsers. This saves you the time and resources that the browsers would normally take to paint the UI. 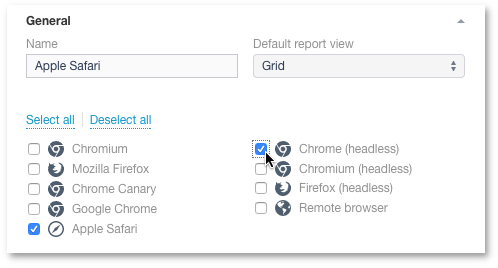 If the tested webpage invokes a native browser dialog during the test scenario, you can check the dialog properties and specify how TestCafe should handle it (which button to click and what text to enter).

Use the new Handle Native Dialogs action to do this. 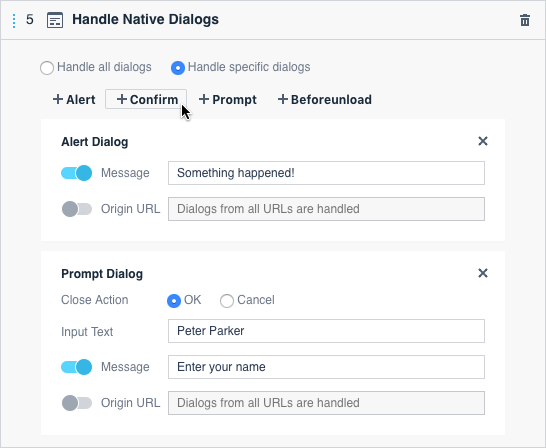 To locate elements with the new Selector Constructor, you can:

We have added the file upload action. You can now record file upload in the Visual Test Recorder or add this action manually.

Work Behind a Proxy

You can now run tests in TestCafe Studio if your machine uses a proxy to access the Internet.

Specify the proxy URL in the Preferences/Settings dialog. You can also list URLs that should be accessed directly. 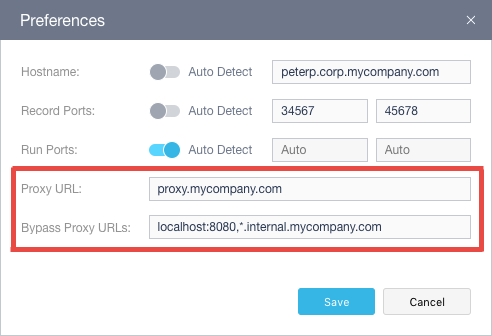 Use the Define Element Selector action to create an element selector. This selector will be visible to all subsequent actions in the test, so that you can reuse it as many times as you need. 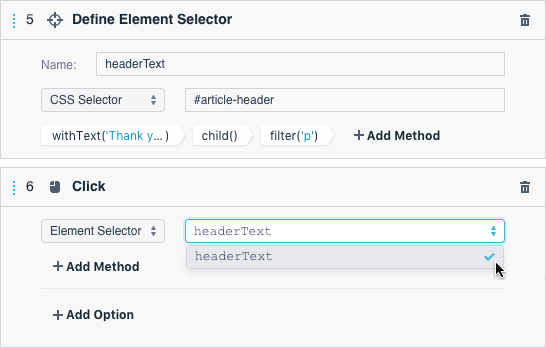 You now have the ability to ensure that custom code returns the correct result when executed on a tested webpage. 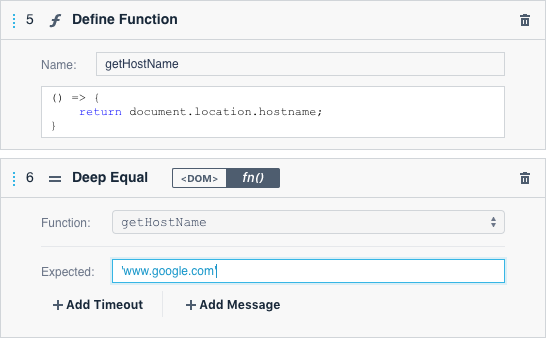 We have added the capability to copy and paste the recorded tests between fixtures.

Right-click a test in the Explorer panel and choose Copy, then right-click the target fixture name and choose Paste (or use Cmd/Ctrl+C and Cmd/Ctrl+V). 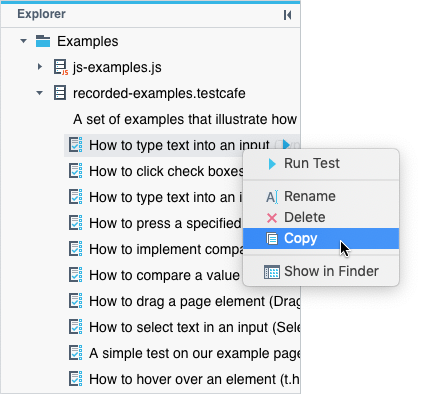 Documentation: Copy and Paste a Test

You can now check if an assertion passes or fails at any moment during recording. Click the Re-evaluate Assertion button and TestCafe Studio will show the assertion result. 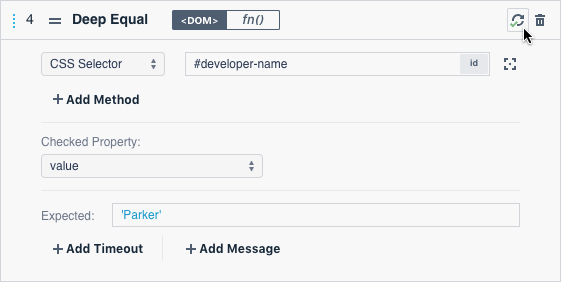 TestCafe Studio needs four vacant ports on the local machine to run and record tests. If you run tests on a remote device, TestCafe Studio will also need to know the hostname of the machine it's running on.

TestCafe Studio can automatically determine the hostname and choose vacant ports. However, depending on your network configuration, you may need to customize these settings. You can now do this in the Preferences/Settings dialog. 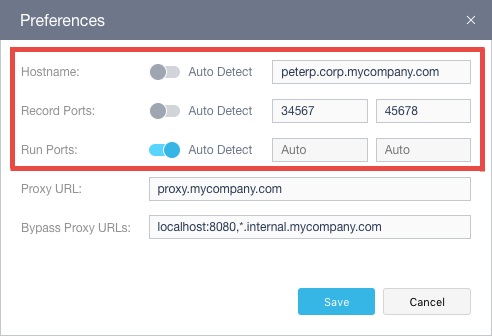 When you edit a selector in Test Editor during recording, TestCafe Studio highlights page elements that match this selector. 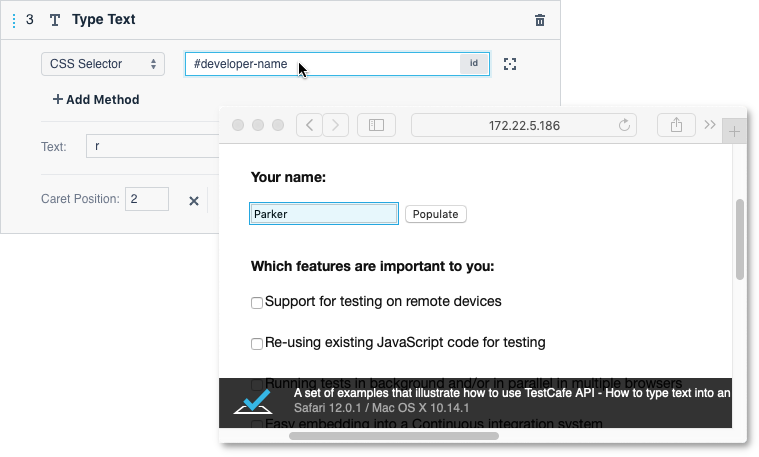 When you create a new test script, you no longer start with an empty file - TestCafe Studio provides a simple template in which a new fixture and test are declared. 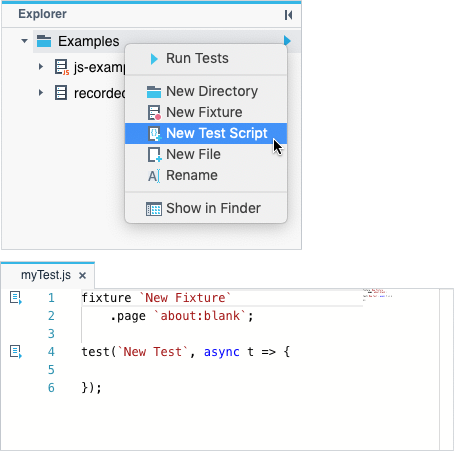 Create tests without writing code. Click through the test case in the browser, and the Visual Test Recorder will record your actions and generate a test.

Add actions and assertions to the list of test steps, and configure their parameters. Select target page elements interactively in the browser.

When you select a target page element for an action or assertion, TestCafe Studio suggests different selectors that match this element. You can choose one that better suits your needs. 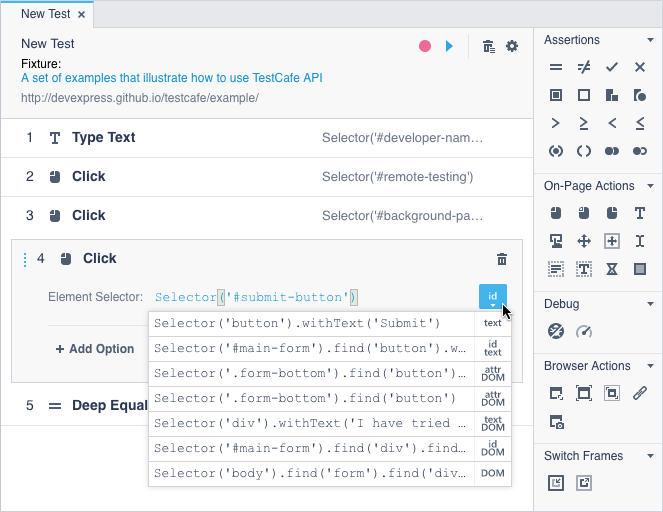 You can create multiple "configurations" that define target browsers and additional test execution settings. You can then run tests for specific configurations. 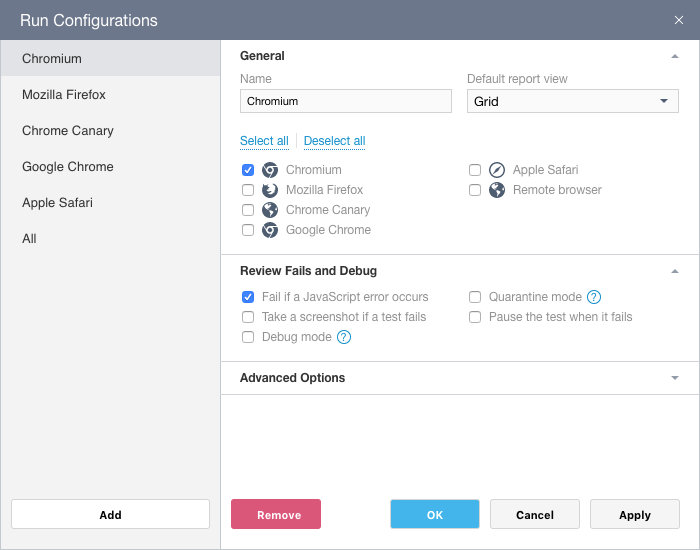 The Reports panel shows information on past test runs and current sessions that can be cancelled (if necessary).

A click on an item opens a detailed report on any given task. You can view test reports and export them into various formats (JSON, list, minimal, spec, xUnit). Plugins that provide additional report formats can also be installed. 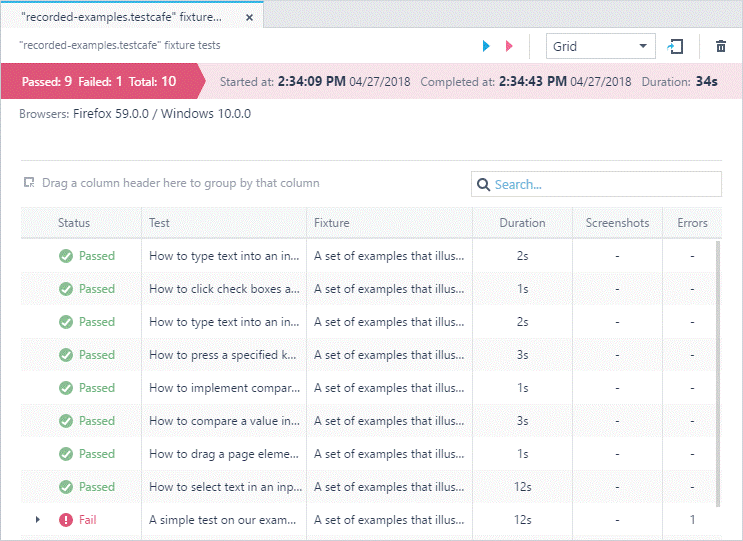 You can create, edit, and view various file formats including test files, test recordings, helpers, wrappers, and PageModels. You can launch tests directly from selected files or folders. 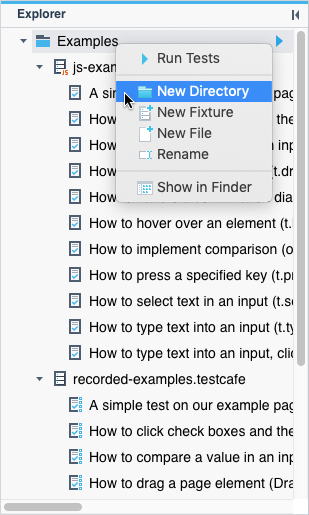 If you prefer to code, TestCafe Studio offers a straightforward and easy-to-learn test API with ES6 and TypeScript support.

A fully integrated code editor with autocomplete and syntax highlighting is also available. You can launch tests directly from the editor. 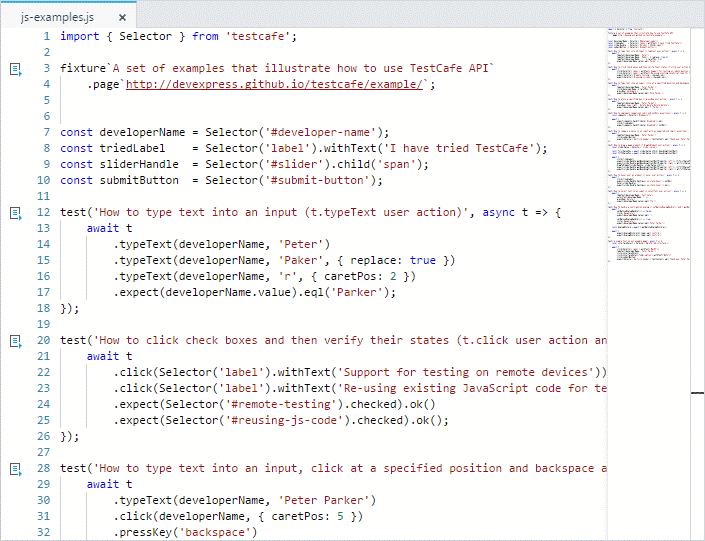 TestCafe Studio can start several instances of the same browser, divide fixture tests into several batches, and execute each batch in its own browser instance.

If an automated test fails, but you cannot reproduce the failure manually, there may be an issue with the script. The most effective way of addressing those issues is by debugging the test session. For this purpose, TestCafe Studio implements all the means necessary to effectively troubleshoot test execution.

When a test is paused, you can explore the tested page with developer tools, interact with it, or step over to the next action (if the test has not failed).

Use the open-source TestCafe, with its extensive command line and JavaScript interfaces, as a test runner.