Define an Appearance for Painting All Visual Elements

You can select a built-in appearance to easily change a chart’s overall look and feel.

The ASP.NET Chart Control provides numerous built-in appearance presets that define the look of a chart’s key elements - such as its diagram, axes, legend and series.

To quickly change the appearance of your chart, you can use the Appearance page of the Chart Wizard. 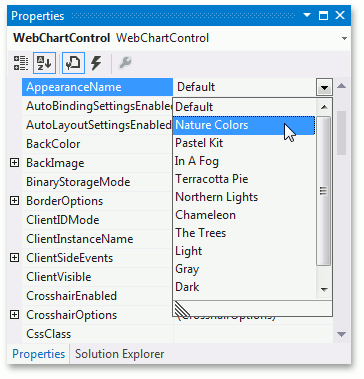 The following images demonstrate a chart with two different appearances.

When you specify the appearance of a chart, you may wish to individually paint each series, or each point within a series (e.g., a Bar series), and define the palette that is used to paint them. For details on how to use a palette to paint chart series, see the following help topic: Choose a Palette for Painting Series, Points and Indicators.

For a step-by-step tutorial, refer to the following help topic: How to: Customize a Chart’s Appearance.

You can also allow end users to specify the pallette and appearance for a chart. The corresponding sample project is available in the following DevExpress Support Center example: How to provide end-users with the capability to change a chart’s appearance on the fly.

See Also
Choose a Palette for Painting Series, Points and Indicators
Create a Custom Palette
Prioritized Appearance and the Appearance Template
Was this page helpful?
Thanks for your feedback!
Any other suggestions? .
Your feedback has been sent