Band is a logical group of columns. In the WinForms Data Grid and ASP.NET Grid View controls, a band is visualized as a header displayed above headers of the columns it combines. This topic describes the use of the Banded Grid Views feature in a WinForms XAF application and the Bands feature in an ASP.NET XAF application. 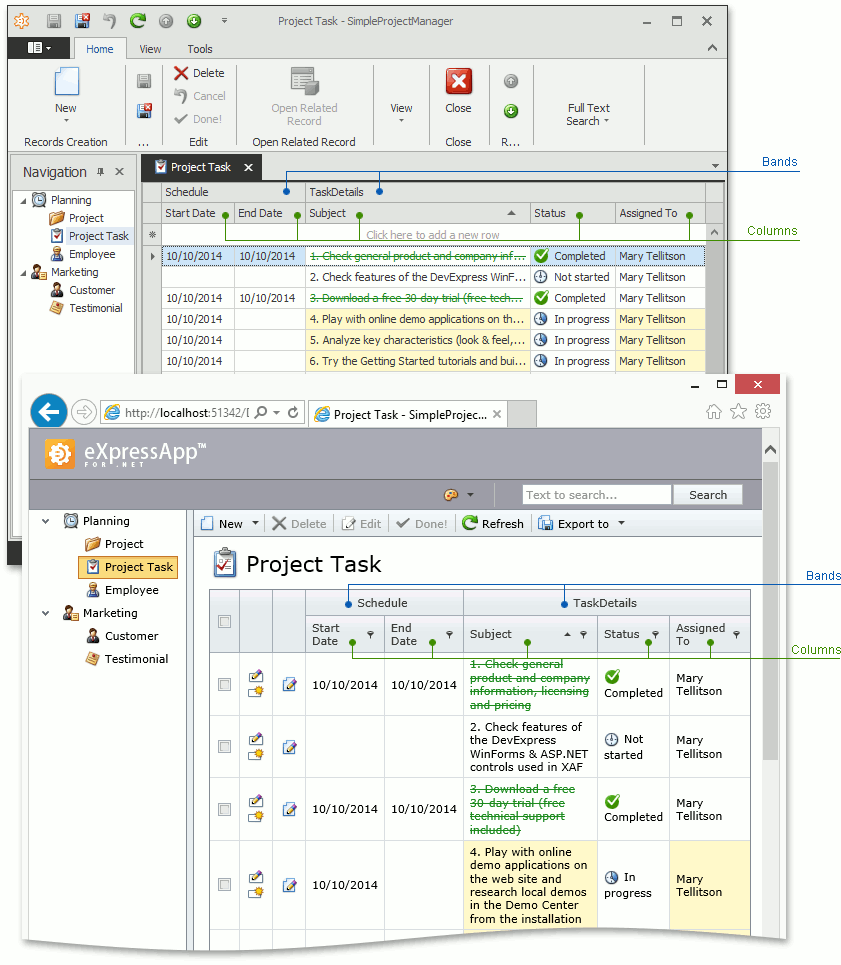 You can see the demonstration of bands in the List Editors | Grid | Banded List View section of the Feature Center demo. The Feature Center demo is installed in %PUBLIC%\Documents\DevExpress Demos 20.2\Components.NET Core Desktop Libraries\eXpressApp Framework\FeatureCenter by default. The ASP.NET version of this demo is available online at http://demos.devexpress.com/XAF/FeatureCenter/.

Bands layout is defined in the Application Model by the structure of the IModelBandsLayout node.

You can add IModelBand child nodes using the Add... | Band context menu command to define bands, and then drag-and-drop columns into the created bands. You can add a band inside an existing band to create a complex bands hierarchy.

Step-by-step instructions on how to configure the bands layout displayed above is available in the How to: Configure Bands in a Grid List Editor (WinForms and ASP.NET) topic. 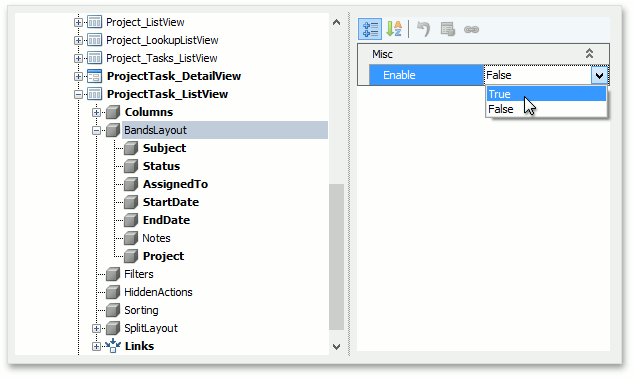 The IModelListView.EditorType property of the banded List View should be GridListEditor or ASPxGridListEditor (the actual List Editor type is available in the platform-specific project's model). Other built-in List Editors do not support bands.

In a WinForms application, the Banded Grid Views is used to display bands. It allows you to arrange column headers across rows. You can also stretch column headers vertically so that they occupy more than one row. The column header vertical position is identified by the IModelBandedColumnWin.RowIndex property of the Views | <ListView> | BandsLayout | Band | Column node.

This property specifies the zero-based row number of the current column within a band. In the image below, the Subject column's RowIndex is 1. The RowIndex of the Status and Assigned To columns is 0. 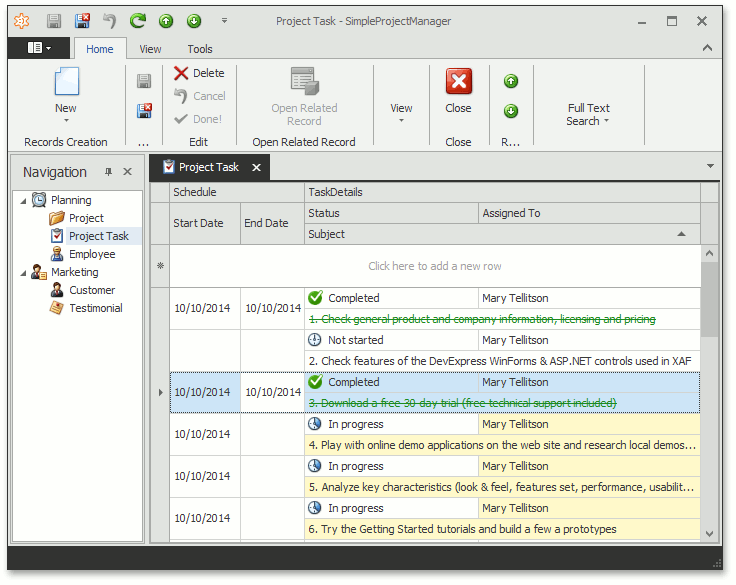 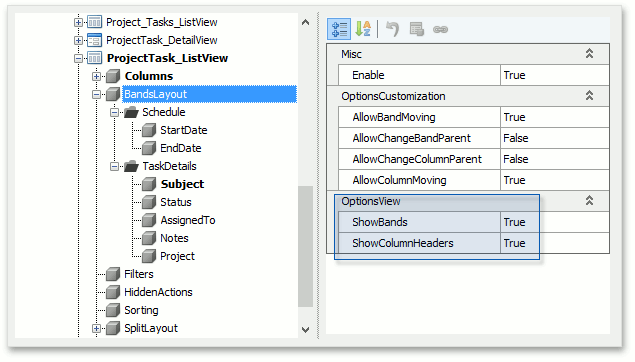 A user can rearrange bands, reorder columns within a band, move columns and bands from one parent band to another. The modified layout is saved to the user differences of the Application Model. In WinForms applications, you can restrict these customizations using the following properties of the Views | <ListView> | BandsLayout node. 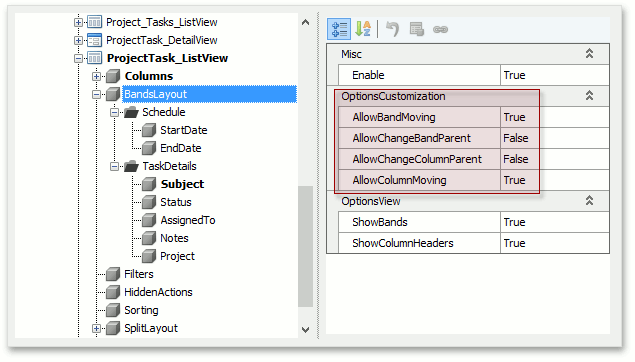 You can use the Reset View Settings Action to undo all runtime customizations in the current View. 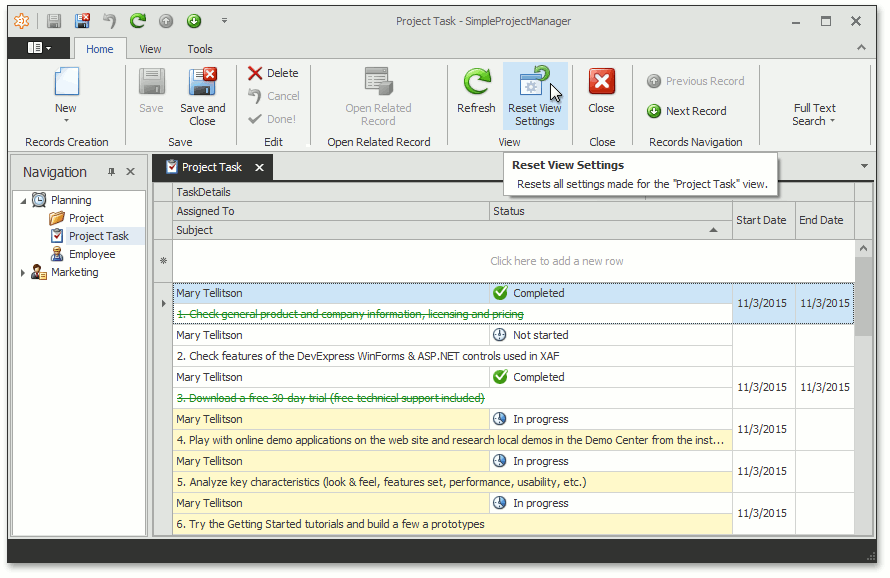 When configuring bands, keep in mind the differences in behavior between WinForms and ASP.NET grid controls:

That is why we recommend the following:

See Also
How to: Configure Bands in a Grid List Editor (WinForms and ASP.NET)
Banded Grid Views
Bands
Feedback
Was this page helpful?
Thanks for your feedback!
Any other suggestions? Tell us here.