Reports are widely used in business applications to present data in human-readable and printer-friendly formats. The Reports V2 module is introduced to simplify the integration of DevExpress Reporting into XAF applications. Note that WinForms and ASP.NET XAF applications are standard .NET applications, and the approaches described in the GUI and Web Reporting tutorials are fully applicable, but you need to create a user interface for reports access and implement a storage for user-defined reports manually. The Reports V2 module provides ready-to-use solutions for these tasks, which cover the most popular scenarios.

With the Reports V2 module, reports are represented by business objects that are stored with other persistent objects in the application database. A list of included reports (both predefined in Visual Studio and added by end-users) is displayed in the Reports List View, which can be invoked from the Reports navigation item. The Reports View is accompanied by the Actions used to manage reports (create, design, print, copy, etc.). Reports can also be executed from a business object context - you can select several objects and then use the ShowInReport Action to display these objects in a report.

If the solutions provided by the Reports V2 module are not applicable in your particular scenario, feel free to integrate XtraReports in a custom way (see How to: Show an XtraReport created at design time, without the use of XAF Reports module).

Preview and save on mobile device predefined reports designed by the developer in Visual Studio or reports created by end-users at runtime in the WinForms or ASP.NET application.

Examples on how to access and customize these controls:

The Reports V2 Module consists of the following platform-agnostic and platform-specific components. 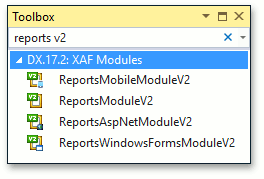 Reports are persisted using business objects (entities) that implement the IReportDataV2 interface. If you use XPO, the ReportDataV2 persistent class implemented in the Business Class Library is used automatically. If you use Entity Framework, you should manually set the ReportsModuleV2.ReportDataType property to ReportDataV2 and add this type to your DBContext (see Create a Report in Visual Studio). You can also use a custom report data type (see How to: Add a Custom Column to the Reports List).