When images are loaded at design time from the DevExpress Image Gallery, an external assembly or project resources, binary data is not added to the project. Target images are referenced using specific identifiers and are loaded into memory dynamically, on demand.

At design time, the ImageCollection and SharedImageCollection components provide a customization menu available via the smart tag, which provides actions for customizing the image collection. 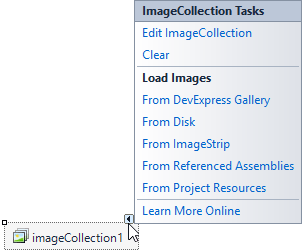 Use Images from ImageCollection in Controls

The following steps demonstrate how you can assign images stored in an ImageCollection to buttons in a RibbonControl.