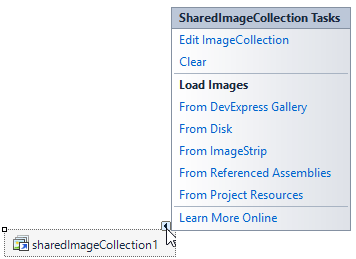 You can load images to the SharedImageCollection from project resources (The project must be built prior to loading images from resources). Do not use this feature when you need to share images stored in one project’s resources between two or more projects within a single solution. To share images between multiple projects merged into a single solution, add these images to the SharedImageCollection directly by loading them from disk. Alternatively, you can create a separate image library to store common images and use the Load Images from External Assembly approach described in the ImageCollection topic.