A cell reference is a set of coordinates that specify the position of a cell or cell range on a worksheet. Use cell references in formulas to obtain and process data contained in the corresponding cells. The results of formulas that use cell references are automatically updated each time the values of these cells are changed.

The following table provides examples of A1 references to a single cell, and various cell ranges (including references to entire rows and columns).

When used in a formula, a cell reference can be relative, absolute or mixed, depending on whether or not it should be automatically adjusted when the formula is copied.

You can also use the R1C1 reference style, where both rows and columns are numbered in a worksheet. To switch on this style in a workbook, use the DocumentSettings.R1C1ReferenceStyle property. A cell reference of the R1C1 style is a combination of “R” followed by the row number and “C” followed by the column number.

In formulas, you can use references to cells located in other worksheets. To do this, specify the worksheet name before the cell reference, and separate them by an exclamation point (!).

When using a worksheet name in a cell reference, enclose it in single quotation marks (‘) in the following cases.

If you rename a worksheet, this worksheet name is automatically updated in all cell references where it is used.

3D references allow you to process data contained in the same cells on multiple worksheets within a workbook. To create a 3D reference, specify the range of worksheet names before the cell (or cell range) reference, and separate them by an exclamation point (!).

The ExternalWorkbookCollection.Add method with the alias parameter allows you to specify a custom workbook name that you can use in external references instead of the original file name or when the external workbook is not saved to a file. In this case, an external reference includes the specified workbook name in square brackets ([ ]), the worksheet name, an exclamation point (!) and the cell reference, as shown in the example below.

An external reference to a defined name in another workbook includes the source workbook name, an exclamation point (!) and the defined name. For example, =book.xlsx!range_name.

If the scope of the defined name is a worksheet in another workbook, specify this worksheet name in an external reference. For example, =[book.xlsx]Sheet3!range_name.

The image below illustrates examples of structured references using different special item specifiers and reference operators (the workbook is opened in Microsoft® Excel®). 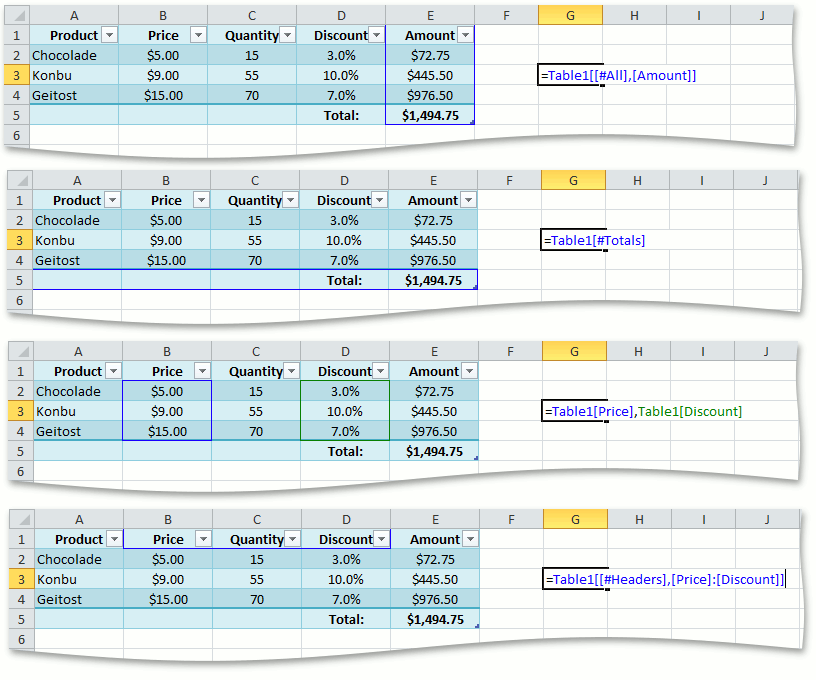 See Also
How to: Use Cell and Worksheet References in Formulas
Feedback
Was this page helpful?
Thanks for your feedback!
Any other suggestions? Tell us here.