You can save report layouts created in a Report Designer to a file or stream. This document describes the main aspects of report serialization. 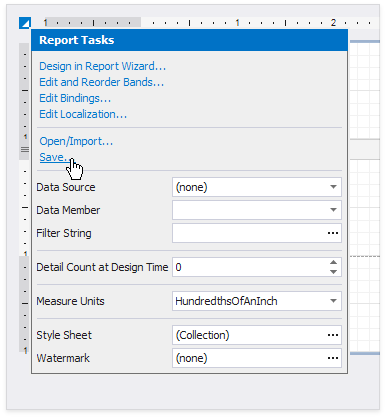 Report definition files have an REPX extension. This file extension is used to filter data in the Save File and Load File dialogs in the Report Designer.

You can also use a text editor (for instance, Notepad) to open a report’s REPX file if you want to know how to implement a particular feature. 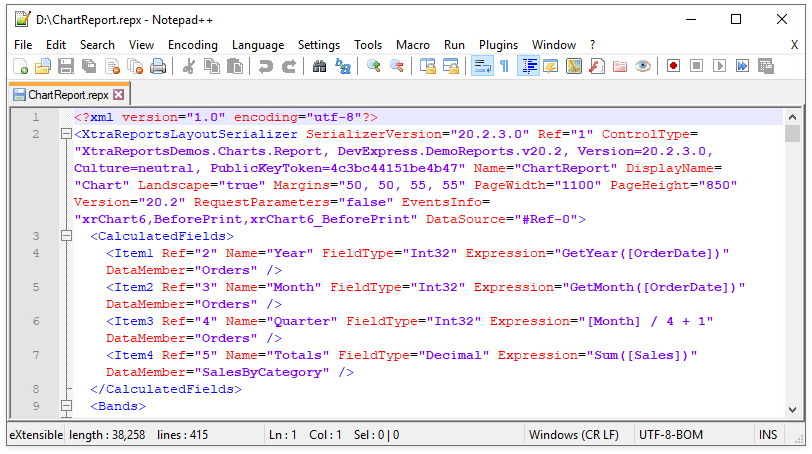 Report definitions do not store information about events handled for a report or its elements. You should use report scripts to store custom code in a report’s definition and execute it when you publish this report.

See the following documents for information on how to save and load report layouts:

You can use the Report Gallery to store reports and their parts and re-use them in other projects.

Implement a Custom Report Storage to store reports in a database or cloud and share them with multiple users.

A report’s definition does not include the layout and data bindings for any referenced subreports. Save them separately when you use the XRSubreport control.

As a possible workaround, consider using detail report bands instead.

When you use the following data sources, a report’s definition includes information about them:

Information about a data source assigned to a report’s XtraReportBase.DataSource property is serialized along with the report’s layout. After users open the report, its data source settings are restored.

Use one of the following approaches to enable DataSet serialization and a custom data adapter that implements the IDataAdapter interface:

An entire BindingSource component cannot always be serialized. You can specify a data source schema for a report when the actual data is not required at design time.

In some cases, the following unhandled exception can be thrown even if you reference the assembly and deploy it with the main application file: “The type or namespace name ‘MyCustomControl’ could not be found (are you missing a using directive or an assembly reference?)” This happens because a referenced assembly is not always loaded into the application’s domain, and the corresponding custom class is not found when the application loads the report’s definition.

Visual Studio does not include a referenced assembly in the resulting assembly when your program does not use any types from it, even if you add this assembly to the list of your project’s references.

To avoid this issue, load this assembly before the application loads any report definitions that reference this custom type:

See Use Custom Controls and Use Third-Party Controls for more information on how to use custom and third-party controls in DevExpress Reports.

You can include custom parameter types when you serialize report definitions and save them as an XML file. Override the ReportStorageExtension class and register a custom ReportDesignExtension that serializes the data source.

To serialize custom objects and properties, set their XtraSerializeableProperty attribute to XtraSerializationVisibility.Reference.

See the following online exanoke for code that illustrates how to save a report and its parameters as an XML file: How to serialize parameters of custom types.

See Also
DevExpress Reports – Security Considerations
Was this page helpful?
Thanks for your feedback!
Any other suggestions? .
Your feedback has been sent