The Script Editor allows end-users to write code for specific event handlers in the End-User Report Designer to adjust the behavior of report controls, bands or the report itself.

This topic describes the basics of using scripts, the Script Editor interface and shows how to use scripting in a report.

The Script Editor provides end-users with the capability to write and execute scripts at runtime when a report is generated. Note that this feature is primarily intended to be used by advanced end-users who want to slightly customize a report in the End-User Report Designer. 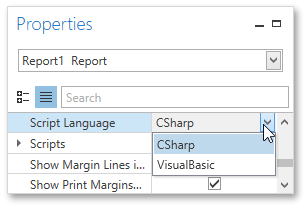 Each report element has its own set of events, which are individual for each element type. To handle an event of a report element, do one of the following.

After the event is specified, a code template is automatically generated in the current scripting language and added in the Script Editor.

To check for errors in the report’s script, click the Validate button. The validation result is displayed in the errors panel at the bottom of the Script Editor. Double-click the error item in the panel’s list to go to the corresponding line of code. If all scripts are valid, the errors panel is empty.