UI customizations made using the Model Editor are called Model Differences and can be stored in different ways. XAF has a ModelStoreBase class, whose descendants define the method for storing Model Differences.

The ModelStoreBase class has the following descendants.

By default, an XAF application created with the Solution Wizard uses the following combination of Model Differences storage technologies.

The Application Model has a layered structure. Layers are listed below in the order of overlap.

To store Model Differences in files, XAF uses *.xafml files that can be edited by the Model Editor. There are two types of *.xafml files. 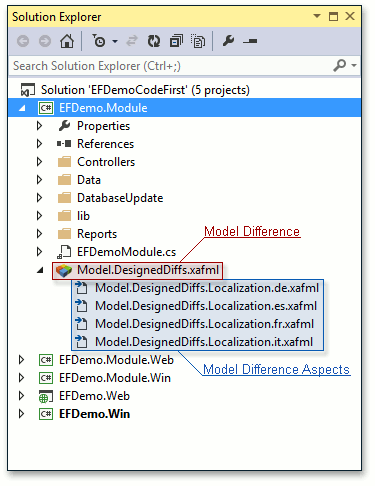 To learn more about the localization of strings in an Application Model, refer to the Localization Basics topic.

The table below shows the name and the location of different *.xafml files.

The User Model Differences location is specified in the App.config file, using the UserModelDiffsLocation key in the appSettings section.

Refer to the How to: Store the Application Model Differences in the Database topic to learn how to enable the Database Storage in an existing application.

To store Model Differences in the database, XAF uses persistent classes that implement in the following interfaces.

If you use the Integrated security mode or the Middle Tier server, ensure that all users have read/write access to ModelDifference and ModelDifferenceAspect types (users with read-only permissions cannot persist application customizations when exiting). Read and write permissions are required for the Model.xafml file import operation. In the Middle Tier scenario, the Create permission is additionally required.

As an alternative for giving a user read-only permissions, you can use the WinApplication.IgnoreUserModelDiffs property to ignore the User’s Model Differences. 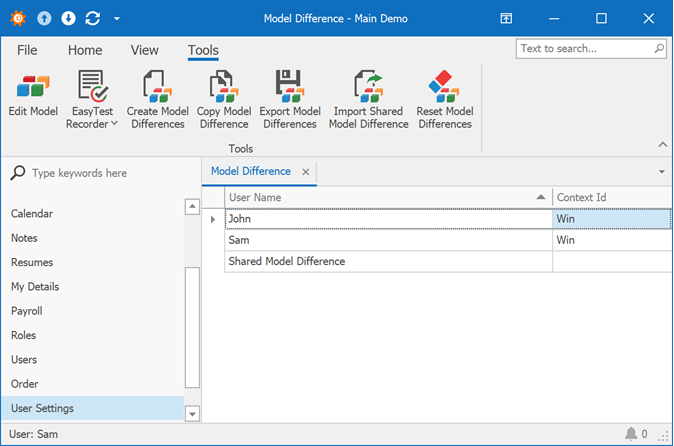 The code that enables storing shared model differences (administrator settings) in the database is added by the Solution Wizard to the WinModule.cs (WinModule.vb) and WebModule.cs (WebModule.vb) files, but is commented out. So, the design-time settings are always loaded by default. You can uncomment the XafApplication.CreateCustomModelDifferenceStore event subscription manually, when required. Note that the Model.xafml file content will be loaded to the database once the application is started. Further changes with this file will be ignored if the database record already exists for the shared model differences. To reload settings from Model.xafml, enable the administrative UI and use the Import Shared Model Difference Action (or delete the Shared Model Difference record and restart).

The following combination of features is not supported when used together.

In this configuration, your application loads information on custom persistent fields from the database and then updates the database schema. However, a thread-safe data layer does not support altering the data model after the database connection is established.

See Also
How to: Store the Application Model Differences in the Database
How to: Enable the Administrative UI for managing Users' Model Differences
Was this page helpful?
Thanks for your feedback!
Any other suggestions? .
Your feedback has been sent