Today, many developers are challenged to build applications with both desktop and web front ends. Typically, this task would require building two different applications with a large amount of duplicate code. In addition, designing a user interface for two applications would take twice as long. The SimpleProjectManager demo shows how to use XAF to quickly build a project management application that runs on Windows and the Web with a common code base. XAF allows you to get started quickly, because it ships with a rich set of typical line-of-business functionality packed into built-in modules.

To learn about the majority of XAF features, follow this comprehensive tutorial. It describes how to implement the MainDemo application that ships with XAF (the web version is also available online). In this tutorial, you will learn how to design a complex business model, extend the default functionality, customize the user interface, use extra modules that ship with XAF, and set up the security system. After completing this tutorial, you will be ready to build real-world applications.

The SimpleProjectManager demo shows how to use XAF to quickly build an ASP.NET Core Blazor project management application. XAF allows you to get started quickly, because it ships with a rich set of typical line-of-business functionality packed into built-in modules. 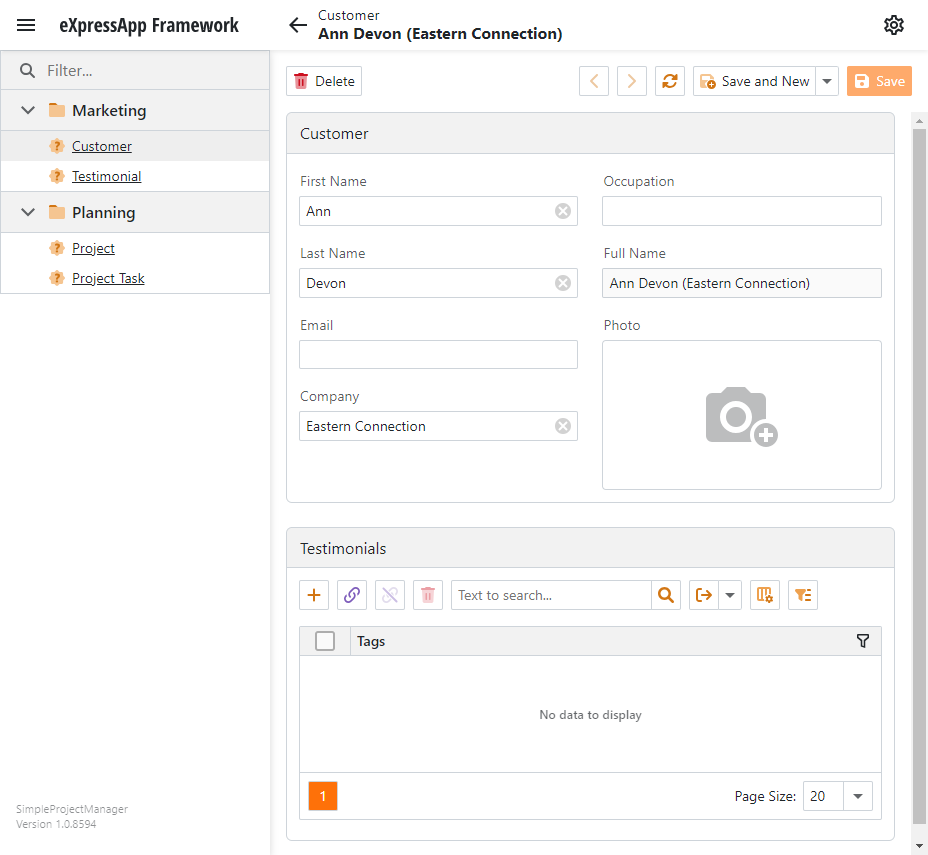 These videos were produced with the help of XAF MVPs Jose Columbie and Joche Ojeda of BitFrameworks.

In this video, we will rapidly develop a multi-platform project management app for Windows and Web platforms with .NET and Visual Studio. Our LOB app UI created from scratch from a single-codebase (C#) will include data security, validation, color highlighting and a cross-platform business logic - all in under 20 minutes using DevExpress XAF, our .NET application framework.

In this video, we talk about the best ways to access and manipulate data in XAF and how to build highly performant apps.

Building a CRM application using XAF with Dave and Adam

In this video, DevExpress MVPs from Llamachant show how to use the eXpressApp Framework to create WinForms and ASP﻿.﻿NET CRM applications from scratch.

This video was produced and is maintained by Llamachant Technology Ltd. Developer Express is not responsible for its content or its technical accuracy.

In this webinar, Seth Juarez discusses the general philosophy behind XAF while he builds an application from scratch.