The eXpressApp Framework includes its own functional testing engine - EasyTest.

EasyTest features a laconic syntax and a simple set of commands. Using a custom script language has strong advantages - you write tests in XAF terms and your tests work for WinForms, ASP.NET Core Blazor and ASP.NET Web Forms applications.

This topic describes the basics of using EasyTest, and the components it comprises. For step-by-step instructions on how to test your XAF applications, refer to the Test an Action topic.

Add EasyTest to Your Project

Refer to the following articles for information on how to integrate EasyTest to your XAF projects:

You can create test scripts in two ways.

With EasyTest, you can test your applications from Visual Studio or integrate functional testing in your CI/CD environment.

For information on how to run tests refer to the following topic: Run Tests.

When you create a new XAF solution, the FunctionalTests folder is added to the module project. 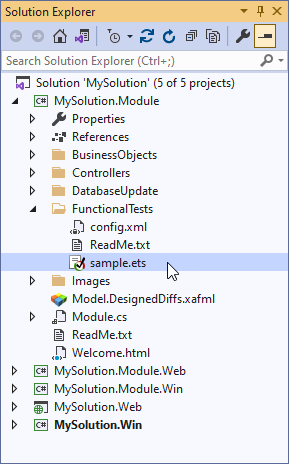 See Also
EasyTest - How to integrate XAF functional testing with Continuous Integration systems like Azure DevOps
EasyTest - Syntax highlighting, collapsible regions, and code snippets in functional test files (*.ets, *.inc) opened with Notepad++ and Visual Studio Code
Was this page helpful?
Thanks for your feedback!
Any other suggestions? .
Your feedback has been sent