With EasyTest, you can test your applications from Visual Studio while developing them. EasyTest supplies a set of actions for a context menu available when you are editing ETS script files in the Visual Studio text editor, and in the Solution Explorer when you click over an ETS file.

All these commands are also available on the EasyTest toolbar, which is disabled by default.

You can run multiple tests in a batch in the following ways:

When running multiple tests, the Run Next Step command works with the selected tests as if they were represented in a single test.

When performing multiple tests, if a test command cannot be executed, the current script file execution is interrupted. Then, the next script file is executed.

When a test fails, EasyTest does the following:

You can set up a breakpoint, as in a regular Visual Studio solution. 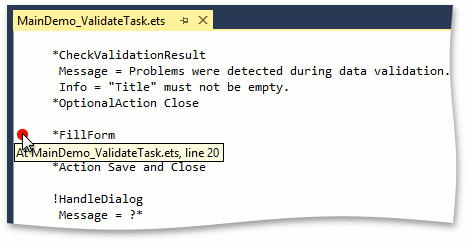 When a test execution is paused at a breakpoint, you can resume execution of the test up to the last command or step-by-step, using appropriate context menu actions.

The test executor utility is a command-line tool that is used to run EasyTest functional tests and produce XML output logs.

If a test did not pass, then in addition to the log file, a screenshot (a JPEG file) is created, capturing the state of the application’s UI at the time of failure. The following image demonstrates how the test executor works.

Build your solution in the EasyTest solution configuration before running the TestExecutor tool.

The test executor utility has the following command-line syntax:

To run a single test script, pass its file name. To sequentially run all test scripts located within a certain directory, pass this directory name.

EasyTest requires interactive UI on the test server (a user must be logged in).