This document explains the basics of using cross-band controls and describes their main features.

Cross-band controls are used to draw lines and rectangles through several bands, as opposed to XRLine, XRShape and XRPanel controls that can be used only within a single band.

To add a cross-band control to the report, drag the appropriate control from the toolbox DX.18.2: Report Controls tab and drop it onto the report's area. 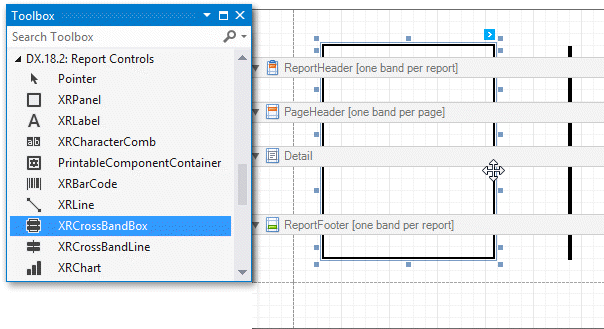 At runtime, to specify the bands at which a cross-band control starts and ends its drawing, use the following properties.

And to specify the control's coordinates (measured in report units) within these bands, use the following properties.

We recommend that you start and end cross-band controls on paired bands (Report Header/Footer, Page Header/Footer or Top/Bottom Margin). Otherwise, these controls can be incorrectly drawn in the report document.