This document describes how to manipulate report controls in the Report Designer and customize the report's layout.

You can use the Property Grid to access a selected element's settings.

Clicking the gray area around the design surface selects the report.

You can also use an element's smart tag to access its most commonly used settings. 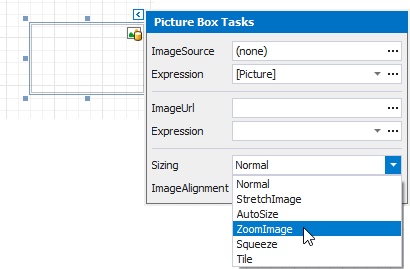 Smart tags are available for most report controls, bands and a report itself. 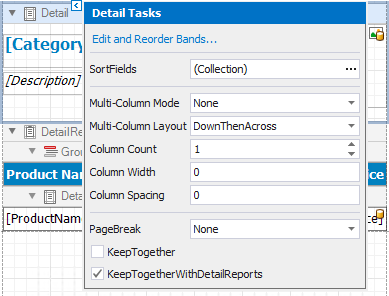 In addition to properties, smart tags can contain context links enabling you to perform various actions.

These commands are also available in the Property Grid.

You can move report controls using the mouse in the same way you move other controls in Visual Studio. To select multiple controls, press and hold the SHIFT or CTRL key and click the required controls.

You can select all the controls within a specific area by clicking an empty place on a report's surface and drawing a rectangle around the required controls. 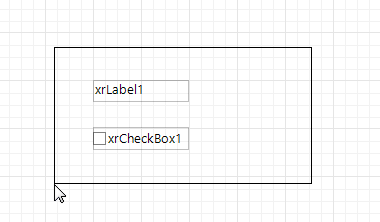 Use the handles displayed around selected controls to change their size.

You can clone an existing report control by selecting it using the mouse, holding the CTRL key and moving the mouse to the required location. A cloned control has the same settings as the initial control.

You can also copy report controls to the clipboard using CTRL + C or the Copy command, and then paste these controls to a new container or band.

You can add selected controls to the Report Gallery and reuse them later in other reports. 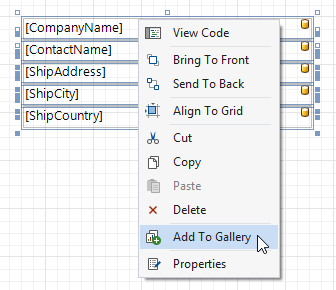 To add a selected template to a report, drag it from the Report Gallery onto a report's surface.

A template stores various settings related to its controls, such as binding information and appearance options. All these settings are restored after adding controls to a report.

The following tools allow you to control report elements' size, location, alignment and to maintain the distance between them:

The Panel control allows you to place various report controls on it to combine them into a group.

You can use this panel to move, copy, change appearance settings, etc. instead of adjusting individual controls.

A table cell can also act as a container for other controls.

If a panel or table cell includes only one control, you can position it within the container using the Fit Bounds to Container command in the context menu. This command resizes the control so that it occupies all the available space (excluding borders). 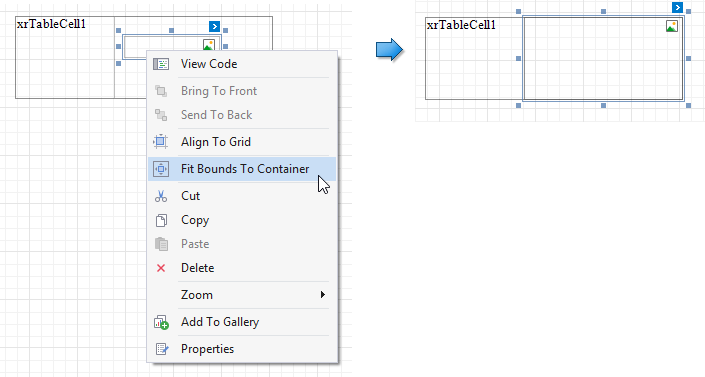 Your report layout should meet the following requirements to be correctly exported to specific formats: