A group within a NavBarControl control. 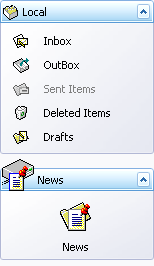 To add a command to a group, a specific NavBarItem must be added to the NavBarGroup.ItemLinks collection. When an item is added to a group, a NavBarItemLink is automatically created that refers to the current item. The created link is added to the group instead of the item itself. This approach allows you to have links to the same NavBar item within multiple groups.

Links within a group can be displayed using large or small images, with or without text. Use the NavBarGroup.GroupStyle property to customize the link display mode.

To access and modify the collection of groups within a NavBarControl, use the NavBarControl.Groups property. Properties provided by the NavBarGroup object give you the ability to control the behavior of the group and its associated links.

A group can be either expanded or collapsed. Specific paint views allow only a single group to be expanded at one time, while in other paint styles, it's possible to have multiple expanded groups simultaneously. To control the expansion status, use the NavBarGroup.Expanded property.

This example shows how to create a NavBarControl in code.The NavBarControl will have two groups ('Charts' and 'Settings') with items. Item link selection is enabled by setting the LinkSelectionMode property to LinkSelectionModeType.OneInGroupAndAllowAutoSelect. To respond to a link selection, the SelectedLinkChanged event is handled. In the OneInGroupAndAllowAutoSelect mode, each group can have a single selected link independent of other groups. When a group is activated and it has no selected link, the first link is auto-selected. At runtime, you will see that the SelectedLinkChanged event fires on group activation, while the LinkClicked event does not. The example demonstrates two methods of assigning images to navbar items:1) explicit assignment of Image objects to items (see the 'Charts' navbar group item initialization);2) implicit assignment, using image indexes (see the 'Settings' navbar group item initialization).

A complete sample project is available at https://github.com/DevExpress-Examples/how-to-create-a-navbarcontrol-in-code-e5096