A scale break is an area across an axis which is shown in place of a section of the axis’ range. It appears across the original axis as a ragged (or wavy or straight, depending on the desired appearance) line.

The most common reason for using scale breaks is when a chart has useless space, inevitable when the chart’s series represent data with great leaps in range. For example, when a series represents a continuous flow of values in both decimals and thousands, by default, this would cause the chart to be uneven, due to the large leap between these value levels. This data doesn’t provide any useful information, since neither series point has any value within this range, and the leap has no points. So, it is natural to replace these empty ranges with ragged lines - scale breaks.

Multiple scale breaks are supported, and it’s possible to add them to an axis of any scale type, whether or not this axis uses a logarithmic scale.

At present, scale breaks can’t work simultaneously with scrolling. Scrolling has the higher priority. So, in a situation when both scale breaks and scrolling are enabled for any axis of the same diagram, scale breaks will be disabled, while scrolling will persist.

Adding scale breaks, it doesn’t matter whether their ranges intersect, or exceed the visible range of the axis. XtraCharts will automatically merge intersecting scale breaks, and adjust the axis range. Enabling scale breaks, keep in mind that they have to deal with axis scale and range, so the axis’ grid lines, tickmarks and interlacing, as well as the axis labels are also affected. 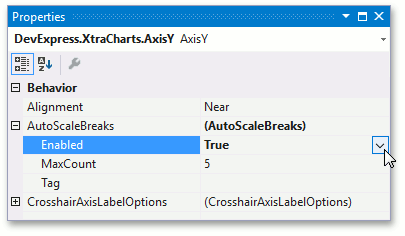 Then, if your chart’s data suggests using scale breaks, they will be created automatically. 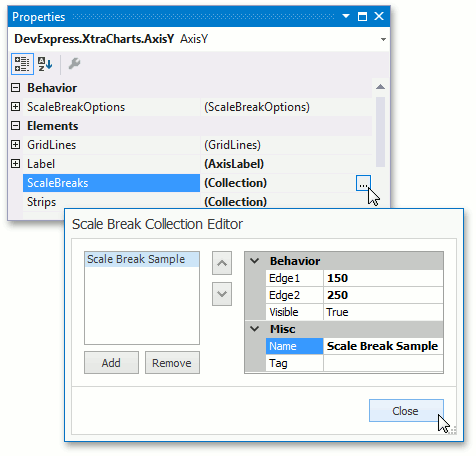 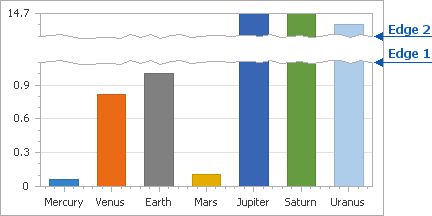 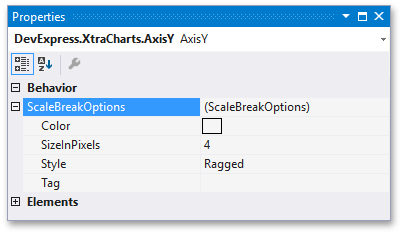