Panes are the visual areas within a chart’s diagram (for the XY-Diagram 2D chart type only). All elements belonging to the Diagram object (axes, strips, constant lines, etc.) and the chart’s series, are displayed within the Panes. 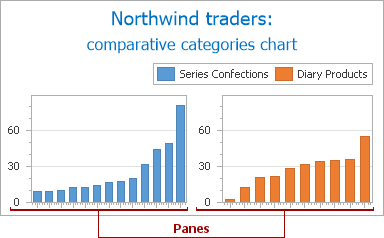 A typical scenario in which multiple panes are useful is when it is necessary to plot a chart series separately within the same chart. Often, it’s also required to use secondary axis with additional panes. As with series, axes (both primary and secondary) can be plotted on separate panes, with respect to series with which they are associated. Most often, it’s required to plot a primary axis through all panes, and create a secondary axis for each pane. The Axis2D.VisibilityInPanes property determines the panes in which an axis should be displayed. To learn more on this, refer to Primary and Secondary Axes.

If scrolling is enabled for your chart’s diagram (more on this at Visual Ranges and Whole Ranges ), when it’s multi-pane, you can either maintain synchronous scrolling through all the panes, or allow individual scrolling of each pane. This depends on whether series displayed on separate panes have their axes in common. A detailed tutorial on this can be found at How to: Customize the Appearance of a Pane’s Scroll Bar (Runtime Sample). 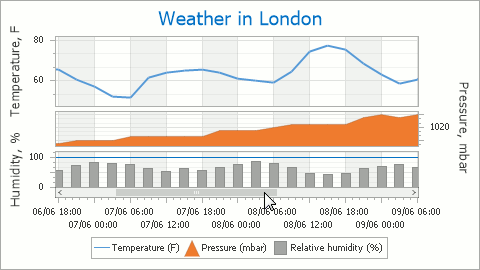 By default, a chart’s diagram includes an XYDiagramDefaultPane object, where the chart’s general data is shown (with the exception of the legend and chart titles). You can access its options via the XYDiagram2D.DefaultPane property, which is shown expanded in the Properties window, in the following image. 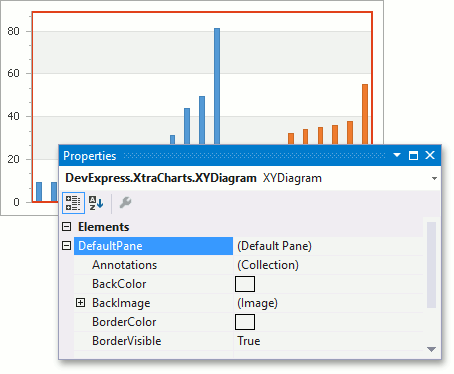 See Also
Add Panes
Pane Layout
Panes Appearance
Pane Title
Feedback
Was this page helpful?
Thanks for your feedback!
Any other suggestions? Tell us here.