How to: Create a Custom Appointment Recurrence Form (Method 1)

This document describes how to create a custom form and replace the standard appointment recurrence editing form with a newly created form. Method 1 uses the AppointmentRecurrenceForm descendant. Use this technique to modify the default form layout or the form's behavior.

The following example illustrates how you can customize the default recurrence dialog by changing captions and initializing editors. 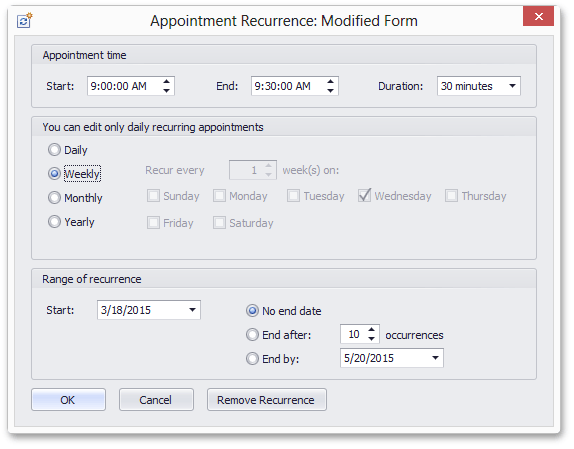 Create an AppointmentRecurrenceForm descendant. Use the default constructor code to perform required initialization for the editors located on the form.

Default recurrence form is invoked from the AppointmentForm by clicking the Recurrence button.

Handle the SchedulerControl.EditAppointmentFormShowing event, to substitute a default appointment form with a custom one.

The example calls the SchedulerControl.CreateAppointment method with parameters required to invoke the recurrence appointment dialog.

A complete sample project is available at https://github.com/DevExpress-Examples/how-to-create-a-custom-recurrence-form-using-the-appointmentrecurrenceform-descendant-t220994