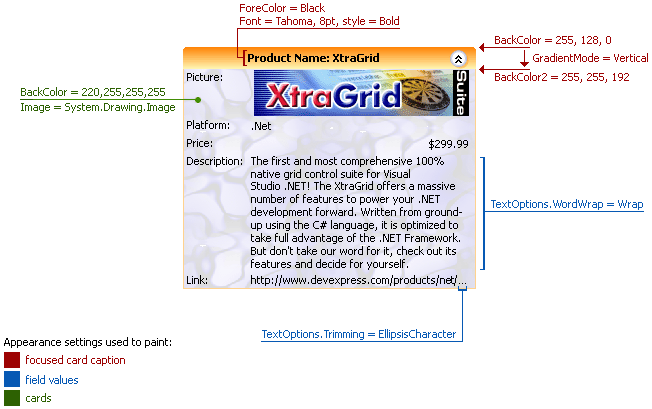 Appearance settings can be specified using the following approaches:

In other cases, the Options.Use... options are not automatically enabled. You may need to enable these options manually for the style settings to be in effect. For example, if the AppearanceOptions.UseBackColor option is set to false, the current AppearanceObject's BackColor setting is ignored, and the control's background is painted using the default settings. To obtain the actual appearance settings that are used to paint the control's elements, use the control's PaintAppearance property (for example, GridView.PaintAppearance).

In some paint schemes (for instance, a skin and Office2003), the scheme defines some visual elements' background (for example, a column header in Data Grid) and it cannot be set to a custom value. Changing these elements' AppearanceObject.BackColor setting has no effect unless you change the paint scheme.

When you invoke the Appearance Editor for another control/visual element, you can access saved templates from a drop-down selector. Choose a template and click "Apply" to apply these settings to the current AppearanceObject.

The following image shows the default appearance priority used to paint a cell in the Tree List:

The Data Grid, Tree List, and other controls support the printing/exporting functionality. These controls expose the AppearancePrint property which provides the appearance settings that are used when printing or exporting the controls. Enable the following option to use these settings:

If this option is set to false, the control is printed/exported as it is displayed on the form.

Save and Restore Appearances

The appearance settings used to paint DevExpress .NET controls can be saved to the system registry, an XML file or written to a stream using the methods listed in the table below.

The following example code shows how to write and read the appearance settings used to paint Grid Control elements to/from an XML file: