Bands are used to organize columns into logical groups. This document describes two approaches to customizing bands at design time.

The Tree List Designer's Bands page allows you to do the following. 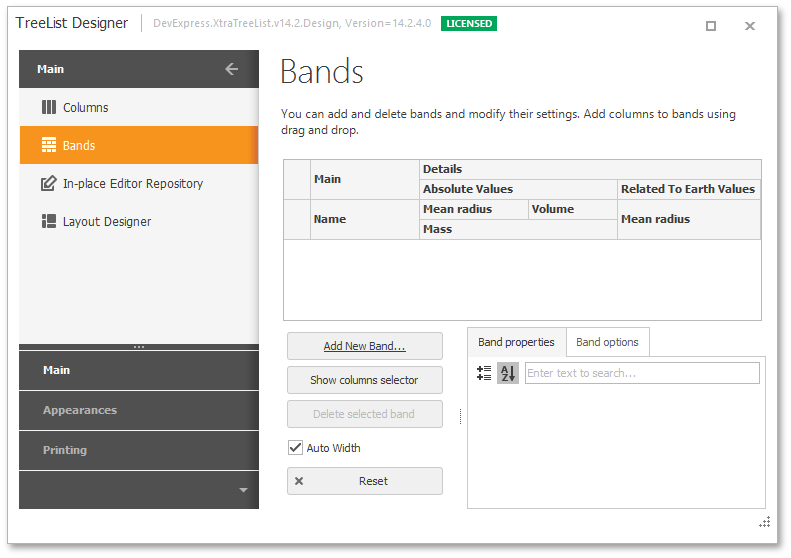 The page contains a preview section, the Properties grid used to access the selected band settings and a set of buttons that provide the functionality described below.

To create a new band at the default position, click the Add New Band... button. After that, the band can be moved to another position by dragging its header.

To create a new band at a specific position, press and hold the Add New Band... button and move the mouse cursor to the target position within the band panel.

To resize bands, drag the right edge of their headers.

The following video shows how to create new bands and change a specific band's caption in the Properties grid using the TreeListBand.Caption property.

Click the Show Columns Selector button to open the Customization Form, which allows you to hide specific bands/columns and display hidden bands/columns. This form contains the Columns and Bands tabs that show headers of hidden columns and bands, respectively. To display a band, drag and drop its header to the Tree List's band panel. Drag-and-drop a band header to the Customization Form to hide this band. The Tree List also provides the capability to quickly hide bands and columns by dragging their headers away from the header panel.

The video below demonstrates an example of band customization.

Some band customization features supported by the Tree List Designer can be utilized directly on the form.

Bands can only be created using the Tree List Designer. Created bands is not visible on the form if the TreeListOptionsView.ShowBandsMode property is set to false.

If the TreeListOptionsCustomization.AllowQuickHideColumns is enabled, you can hide bands and individual columns by dragging their headers away from the header panel, even when the Customization Form is not opened.

To access and customize a band's settings (customization options, caption, size, etc.) in the Properties grid, select this band by clicking its header in the Tree List. Note that you can simultaneously customize settings of multiple bands. Hold down the SHIFT or CTRL key while clicking band headers. 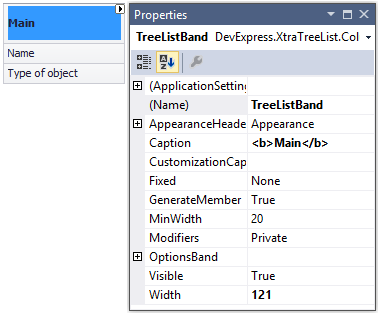 When a band is selected, it displays a smart tag. Clicking the smart tag invokes the smart tag panel, which allows you to change the band caption and add a new column to the band.

To delete an existing band, click this band header and press Delete.

See Also
Customization Form
Tree List Designer
Bands
Feedback
Was this page helpful?
Thanks for your feedback!
Any other suggestions? Tell us here.