The Spreadsheet control enables you to use password encryption to prevent unauthorized people from opening your workbooks. It also offers a workbook protection functionality to restrict changes to workbooks, worksheets, and specific ranges. In a protected workbook, worksheets cannot be added, deleted or renamed by users. Also, users are prohibited from moving worksheets within the workbook. A protected worksheet does not allow a user to change cell values or modify the worksheet in other ways. Also, different sheets can have different levels of protection. For example, a range in a protected worksheet can be unlocked for specific users (the Windows domain security model is used), but other users may be prompted for a password when they try to edit the range.

The Spreadsheet control can open and save password encrypted files in binary (.xls) and OpenXml (.xlsx) formats.

The table below lists ways to specify a password to open the encrypted file.

If neither method provides a correct password, the SpreadsheetControl.EncryptedFilePasswordCheckFailed event occurs. Handle this event to obtain the error that led to this event (Error) and determine whether to prompt a user for a password (TryAgain).

When the TryAgain property is set to false, a warning message is displayed and the Spreadsheet control loads an empty document. The message contains localized text specified by the XtraSpreadsheetStringId.Msg_IncorrectPassword enumeration member.

Save the Encrypted File

You can specify a password to save the encrypted file in the following ways.

An end-user can protect a workbook using the following dialog. 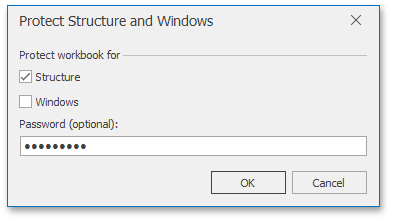 The end-user interface for workbook protection is described in greater detail in the Protect Workbook Dialog topic.

You can protect a worksheet to lock the cells so that end-users can only perform a specific (restricted) set of actions.

By default, all cells in the worksheet have the Protection.Locked attribute set to true. When protection is applied to the worksheet, these cells become read-only. The SpreadsheetControl.ProtectionWarning event occurs on attempt to edit a locked cell.

Cells with the Protection.Locked attribute set to false are not protected when worksheet protection is applied, so that the end-users can edit their contents.

By default (when you pass the WorksheetProtectionPermissions.Default parameter to the Protect method), a protected worksheet is locked so that the user is only able to select cells.

An end-user can protect a worksheet using the following dialog. 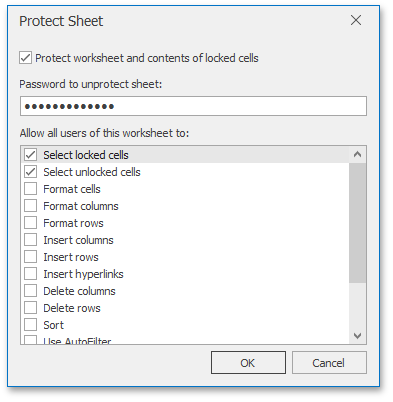 The end-user interface for worksheet protection is described in greater detail in the Protect Sheet Dialog topic.

Unlock Ranges in a Protected Worksheet

Cells with the Protection.Locked attribute set to false are editable when worksheet protection is applied. However, you might wish to protect the range of cells so that it is editable only for authenticated users. Here is a brief guide on how to accomplish this.

The Worksheet.ProtectedRanges collection contains ranges that can be unlocked for users providing the required credentials. A user can be authenticated in one of the following ways.

Note that these permissions are in effect on a protected worksheet (use the Worksheet.Protect method).

An end-user can specify unlocked ranges in the following dialog. 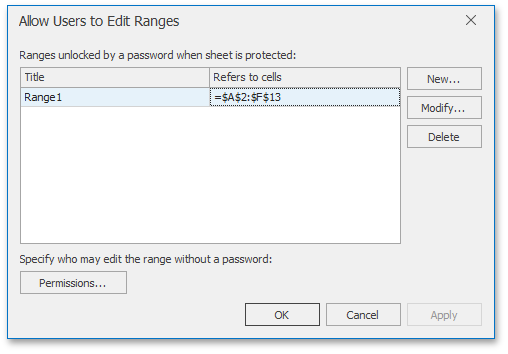 For more details on the end-user interface, see the User Permissions Dialog topic.