You can use the Features options page to enable or disable a Feature UI, to manage CodeRush Classic features, and to specify the IDE behavior when conflicting shortcuts are used. 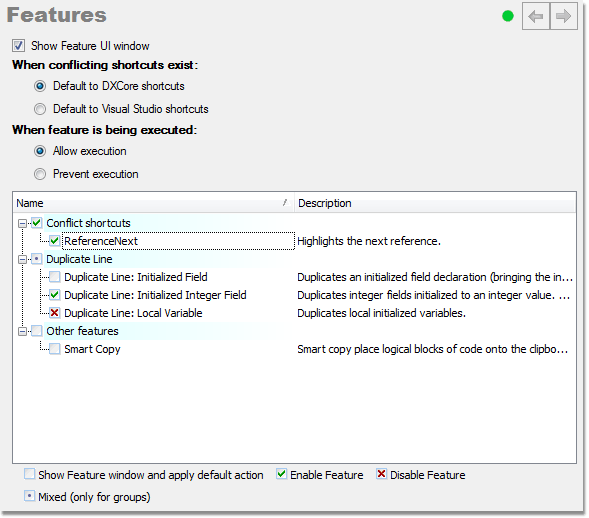 Specifies whether the Feature UI window is shown each time any feature is executed.

When feature is executed

Specifies whether CodeRush Classic features are allowed or suppressed by default.

The table at the bottom of the options page contains features and conflicting shortcuts which were previously used. This table enables you to create exceptions to the When conflicting shortcuts exist and When feature is executed settings. Mark the desired table item with one of the following markers, to specify its behavior:

marker is shown for a group which includes several items marked with different markers.

Exceptions can be created in other ways than this table. The Feature UI window also enables you to create exceptions. For example, the Feature UI window is shown for some executed CodeRush Classic features. To allow executing this feature in future, click OK. Following that, the appropriate item of the Features table is marked with the